There’s a French saying, ‘mise-en-scène’, used in the film industry to describe, as per its literal translation, what is ‘put in the scene’. Costume design, hairstyling, set design, and lighting are just some of the production aspects that contribute to a film’s mise-en-scène. But they all work towards a common goal; that of bolstering the effect of storytelling through a series of visual cues.

Here we’ll look at one of the most enduring devices of its kind; the use of venetian blinds in film lighting and set design. Where did it originate, what does it signify and how has it stood the test of time? 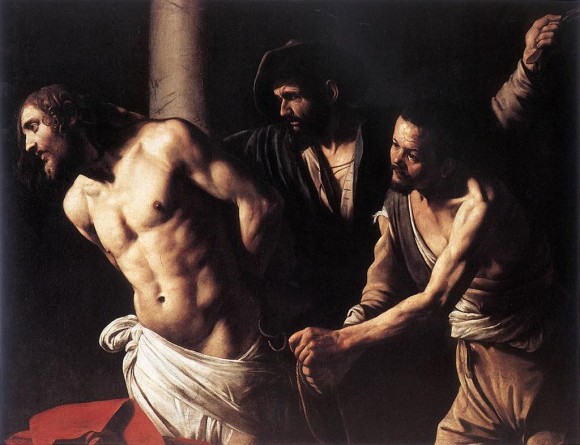 With shady characters, even shadier lighting, seedy backstreet locations and dramatic soundtracks, film noir was a result of, and perfectly suited to its uneasy post-war heyday of the 1940s and ‘50s. It’s still debated as to whether ‘noir’ can be called a genre as opposed to a dark, defining mood that permeates the films it typifies.

The bold contrasts of light and shade it uses are as reminiscent of the chiaroscuro technique of Caravaggio’s Baroque artwork as they are the German Expressionism of the 1920s. 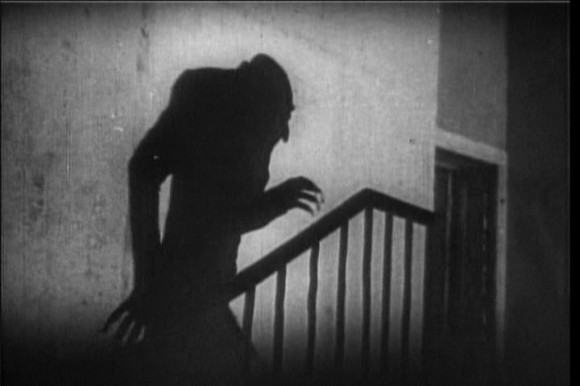 These first two pictures illustrate how contrast can be used to surmise righteousness and evil. The way Count Orlok (an unauthorised variation on Bram Stoker’s Dracula) is depicted in stark shadow in this still from Nosferatu undoubtedly represents the latter!

The mystery and foreboding inherent in shadow are used to great effect in 1944’s Double Indemnity; widely regarded as a classic and a pioneering film of its kind. Here, director Billy Wilder revels in shifting the viewer’s expectations of who the hatted man could be; hero or villain? 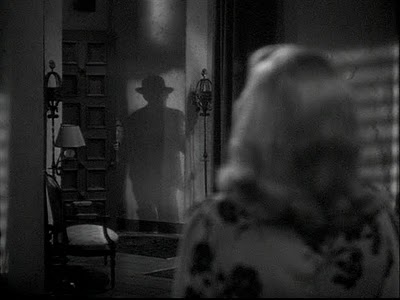 The screenshot (left) also demonstrates one of film noir`s most enduring calling cards; the shadows cast by venetian blinds.

The invention of Technicolor in the early 1900s meant an array of colour feature films were produced before the advent of film noir. Lighting effects like this, though, intrinsically lent themselves to black and white which, as a happy coincidence, also helped to keep production costs low.

Lingering trails of cigarette smoke or a dusty atmosphere help to pronounce the effect, as seen in these stills from 1997’s police corruption neo-noir, LA Confidential. 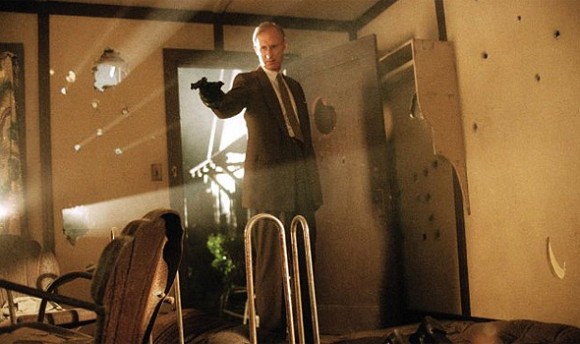 Crime is an essential ingredient to a ‘textbook’ film noir and provides instant validation for the use of venetian blinds; the suggestion of the protagonist being caged; the slats of the blind, sometimes quite obviously representing the bars of a prison cell.

This image from Stanley Kubrick`s 1956 noir, The Killing, leaves the viewer in little doubt as to the dubious backgrounds of these two characters; their guns as obvious props; the chequered shadow perhaps offering a glimpse into their past or imminent future? 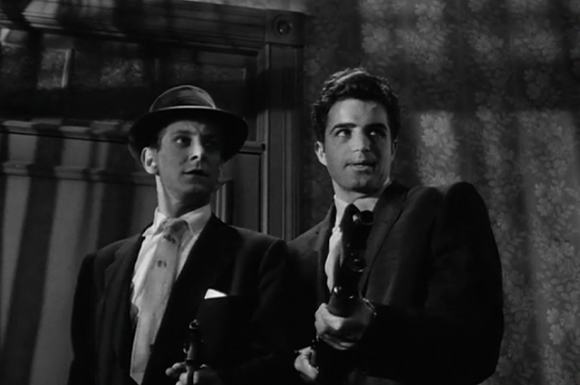 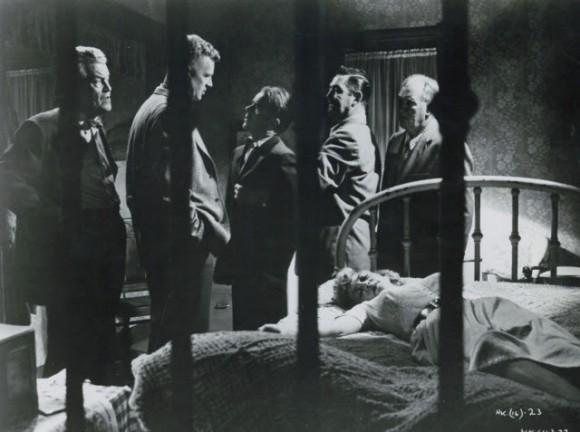 Elsewhere in the film Kubrick frames a set of characters using the bars of a bedstead, making an even blunter statement of menace and premonition.

It’s not always criminals, though, that are set behind these metaphorical bars. Instead, they’re often used as a filter, giving either audience or protagonist a partial view of their subject and leaving them grasping for a truth, as yet unseen in its entirety. 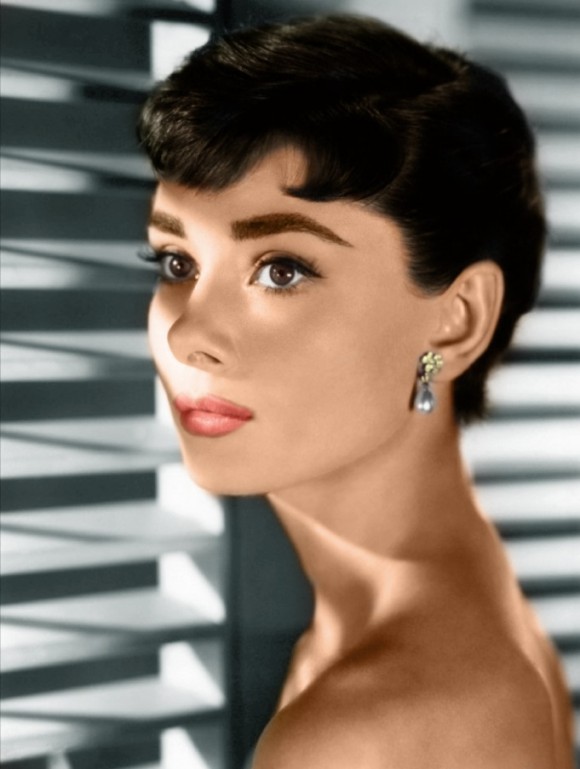 Take, for example, this image of Audrey Hepburn from the 1954 romantic comedy, Sabrina.

While not a film noir, the effect of the louvres on the windows here is near-identical to that of venetian blinds and perfectly parallels the secret love Sabrina tries to hide in the storyline. Although her appearance and demeanour change from the start of the film, her feelings remain the same, hence this half light / half shade depiction.

Francis Ford Coppola’s Godfather Trilogy (1972 – 1990) chronicles how Michael, the youngest son of the Corleone mafia dynasty, is forced to abandon his resolve to never follow in his father’s footsteps, tragically leaving him grasping for legitimacy through forcibly illegitimate practices. 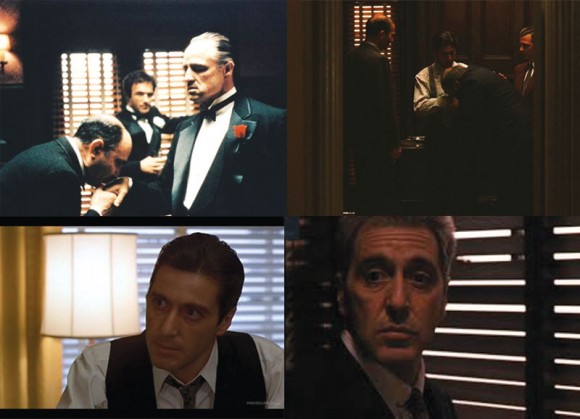 Coppola uses venetian blinds for Michael’s scenes throughout the Trilogy; the light representing his desire to remain true to his best intentions; the dark signifying the claustrophobic restrictions of his situation. The two shots, above, taken from The Godfather (1972) particularly illustrate his compromise, showing Michael (Al Pacino), in the second, assuming the role of his father, Vito (Marlon Brando), in the first.

Intelligent use of the venetian blind effect has, over the years, made it a staple of film lighting and set design. It sometimes seems we’re so conditioned to it that, unless it’s particularly made a feature of, we’re quite satisfied to unquestioningly accept its inferences. For example, do you recall the venetian blinds in these films?

It`s impossible to ignore them, however, in examples such as this:

Was Beyoncé consciously referencing 1940s film noir in her Dance For You music video? Or is it more likely she was tipping her hat to Kim Basinger’s dance in 9½ Weeks? Similarly, where did Adrian Lyne, director of 9½ Weeks, find his inspiration for that particular scene?

The venetian blind effect has earned its place in the canon of film trickery because it works so well and has almost invariably made its subjects look ‘cool’; E.T. perhaps being a notable exception!

So, the next time you see venetian blinds used on TV, in a music video or film, take a minute to think about why they’re still there, even after all these years.

And, to achieve the classic film noir look in your own home, click on these links for our extensive ranges of wooden and aluminium venetian blinds.