Hotels demand something different from interior design than a home does. With a home, it’s yours, you do it to your taste and if someone else doesn’t like it then, well, stuff ‘em.

But a hotel, when you strip it back, is a business, and the hotel business is extremely competitive. With the prevalence of the internet hotels are being forced, by necessity to provide something special for their customers. This is why hotels are often at the forefront of interior design. The interiors of hotels often represent some of the best architects and designers in the world collaborating. They need to create not just a place to sleep and eat, but a place to have an experience. 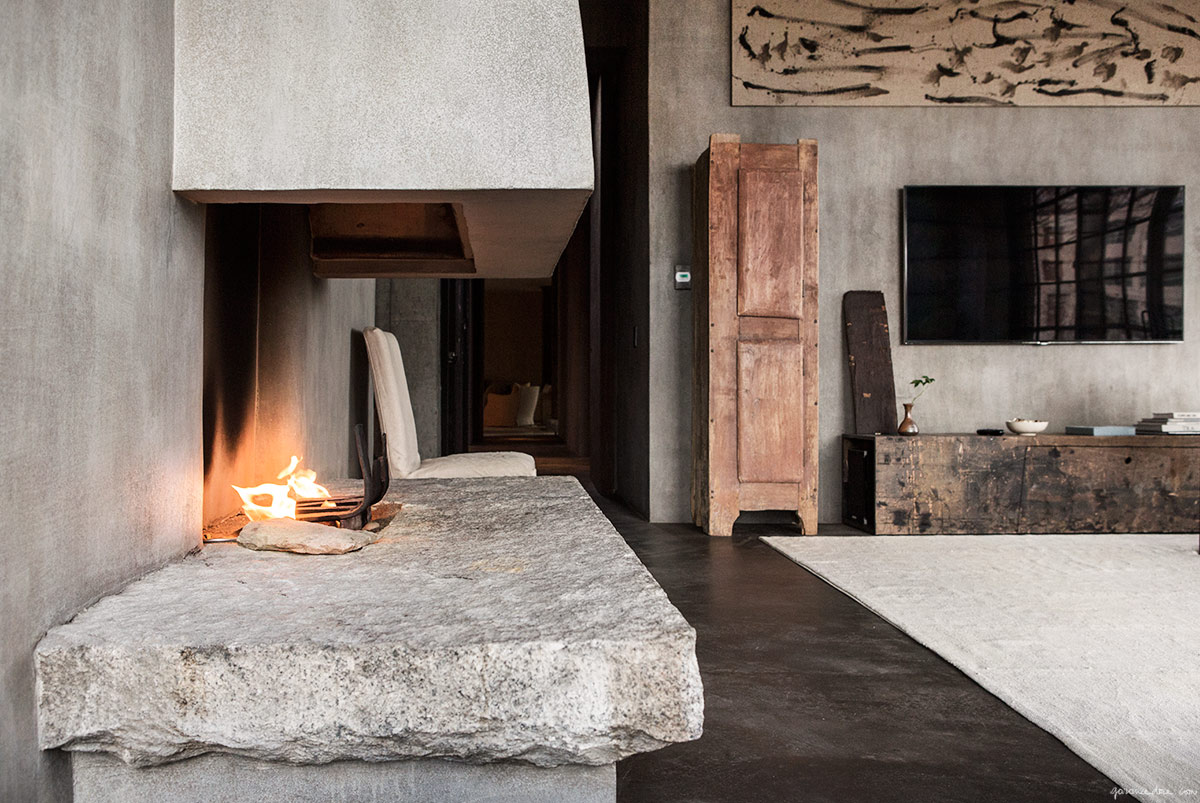 This means that often in Hotels you can see the direction that interior design might take in the near future. Similar in principle to a fashion show catwalk or a concept car, chances are that exact model won’t be for sale: but there will be a trickle down of design and technology. This same principle often applies to hotels and interior design. We took a look at some of the most contemporary Hotels to see if there are any patterns we can ascertain and see what direction interior design might take.

The Pumphouse was built in the 1940’s to pump water to the nearby power station in St.Claire Lagoon. 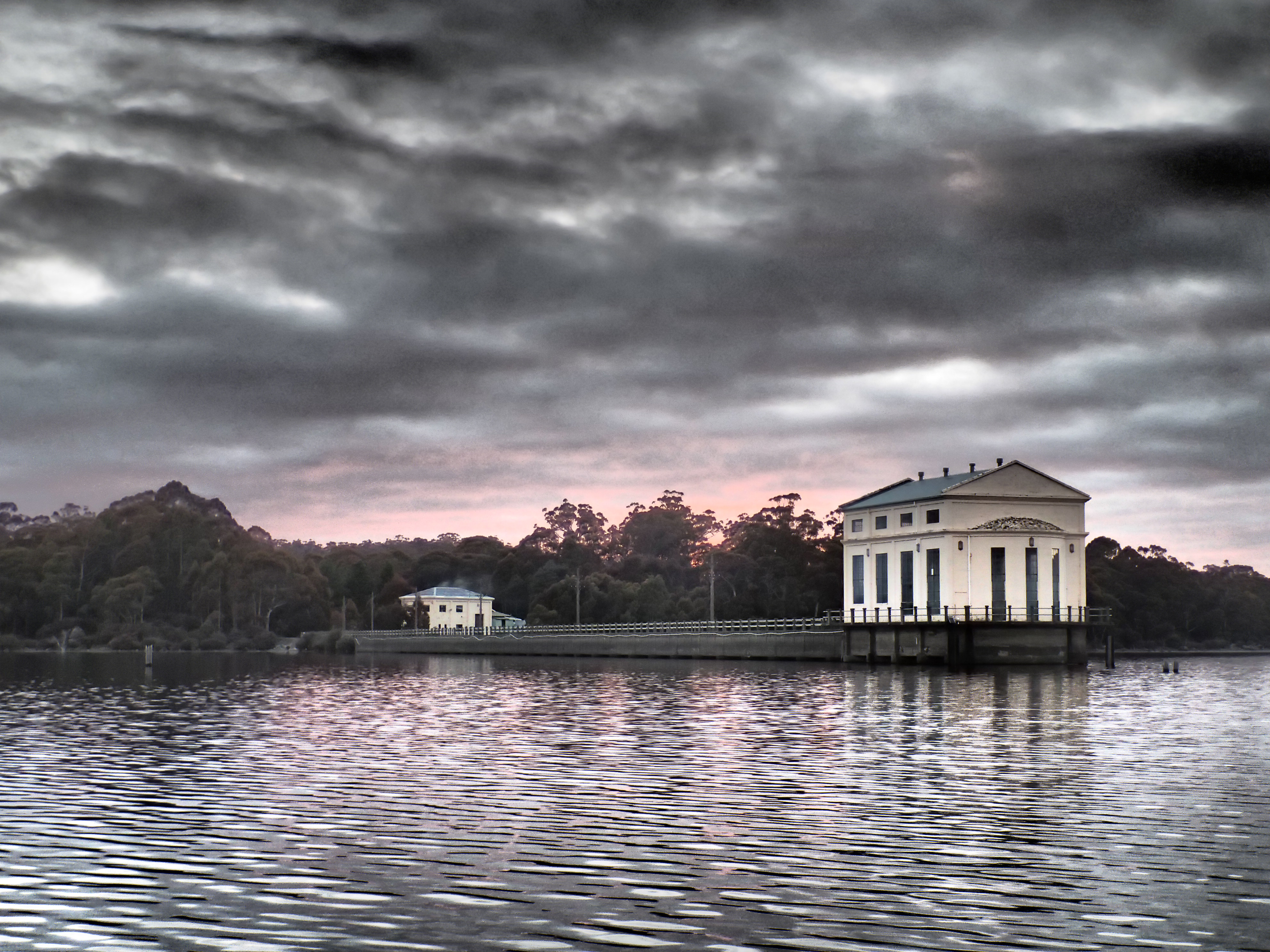 But upon completion it was never actually used, and sat desolate until it’s decommission in the 1990’s, only ever switched on and ran for maintenance. 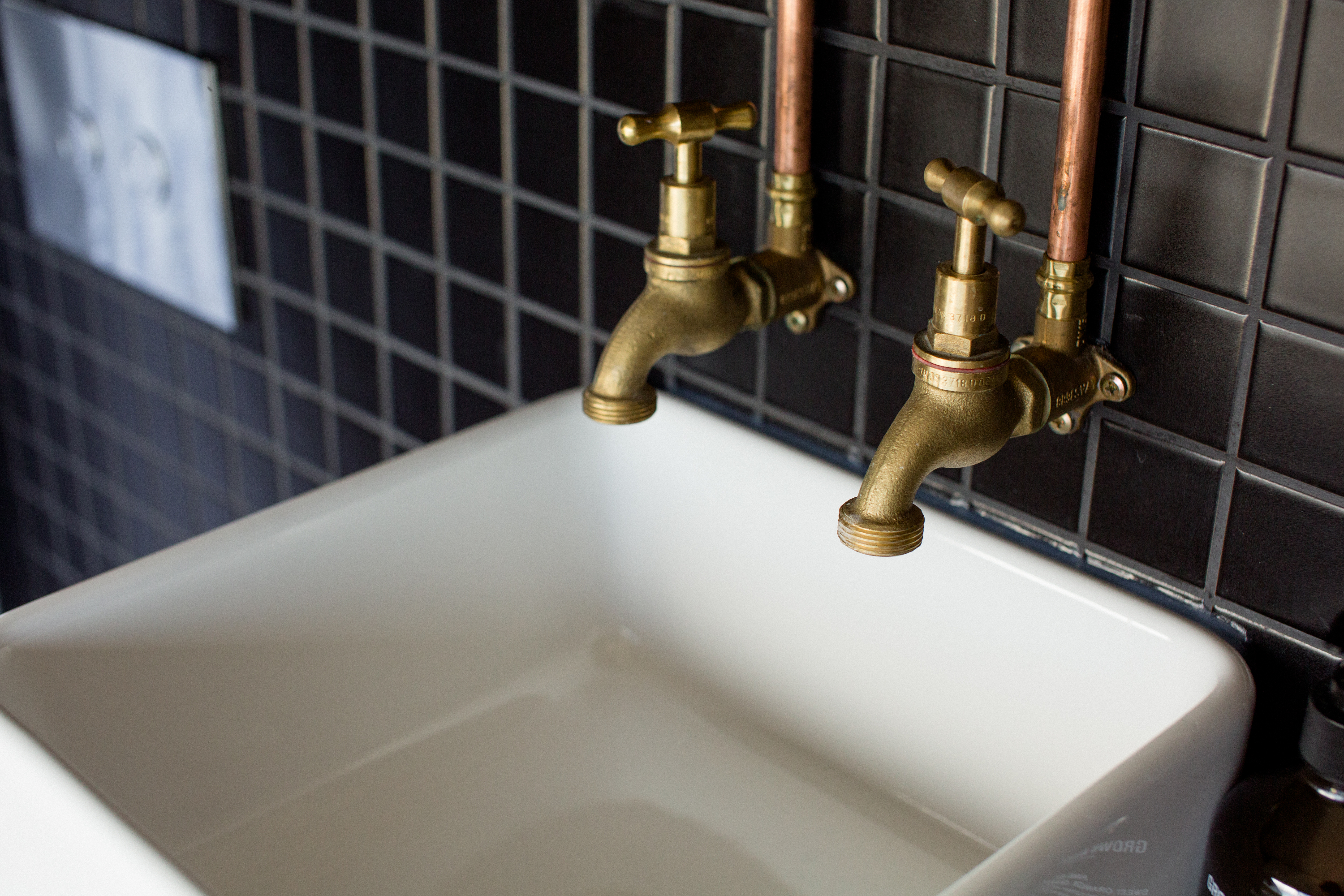 Then in 2004 Simon Currant secured the lease for it and began to re-model the old pumphouse. 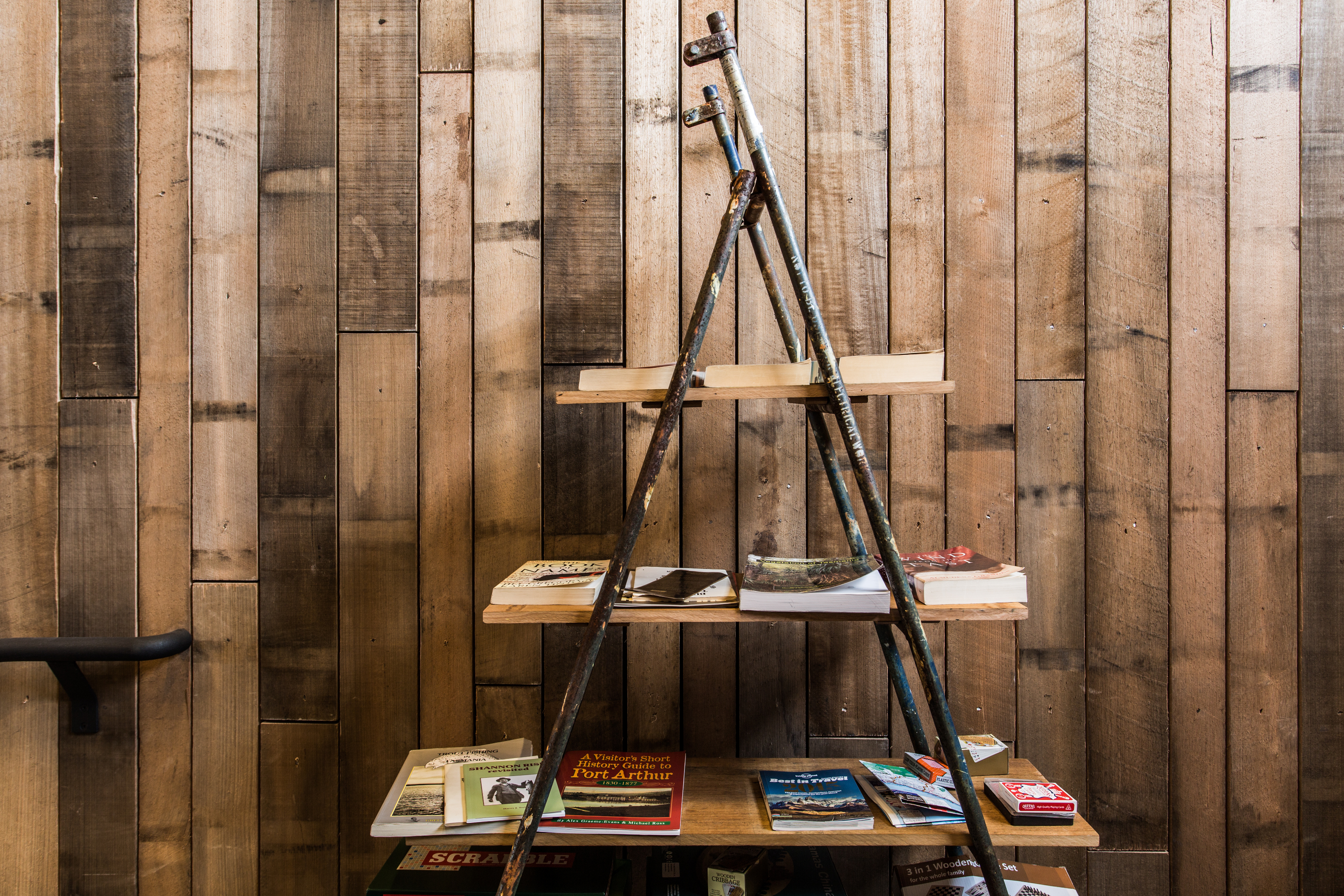 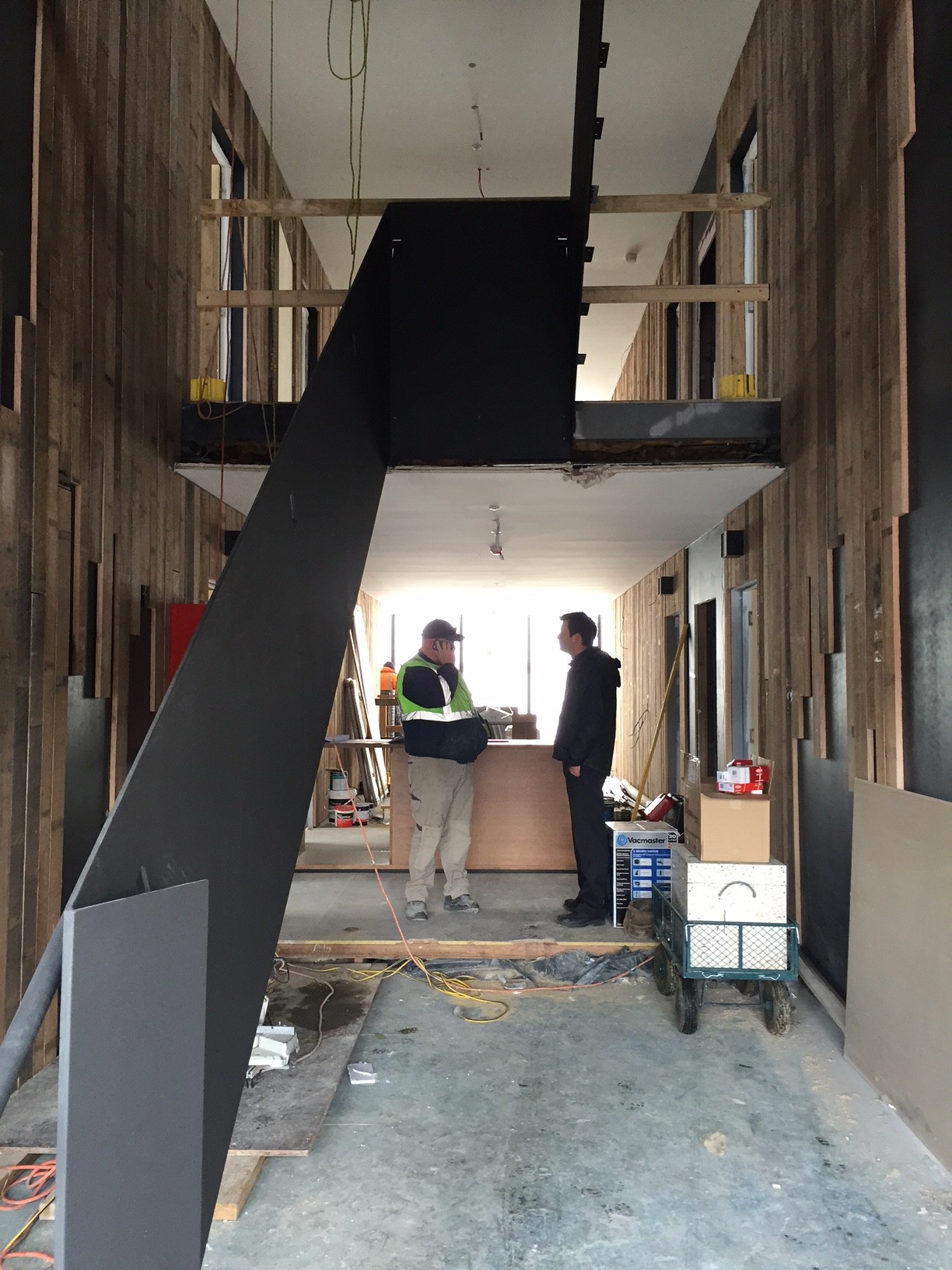 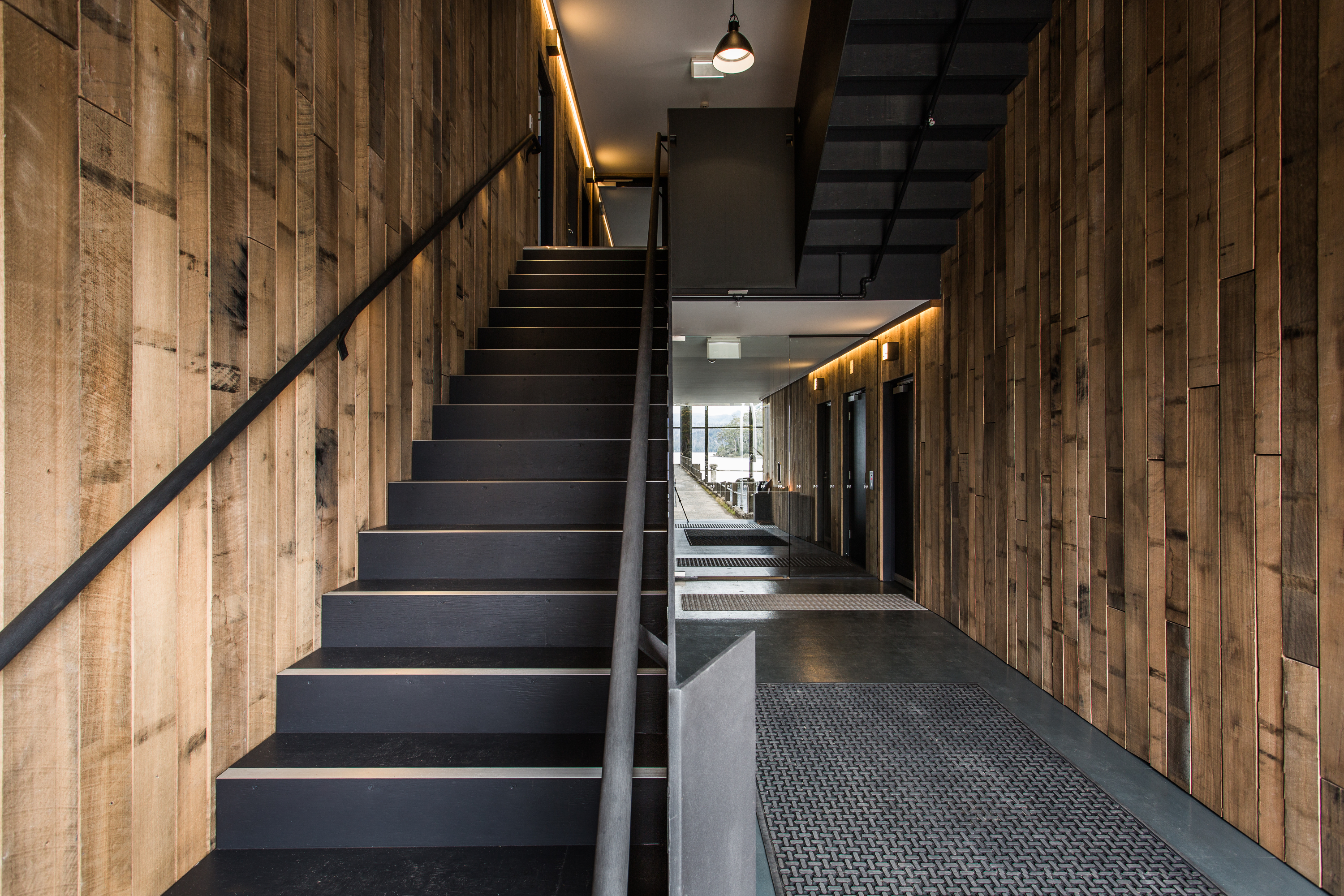 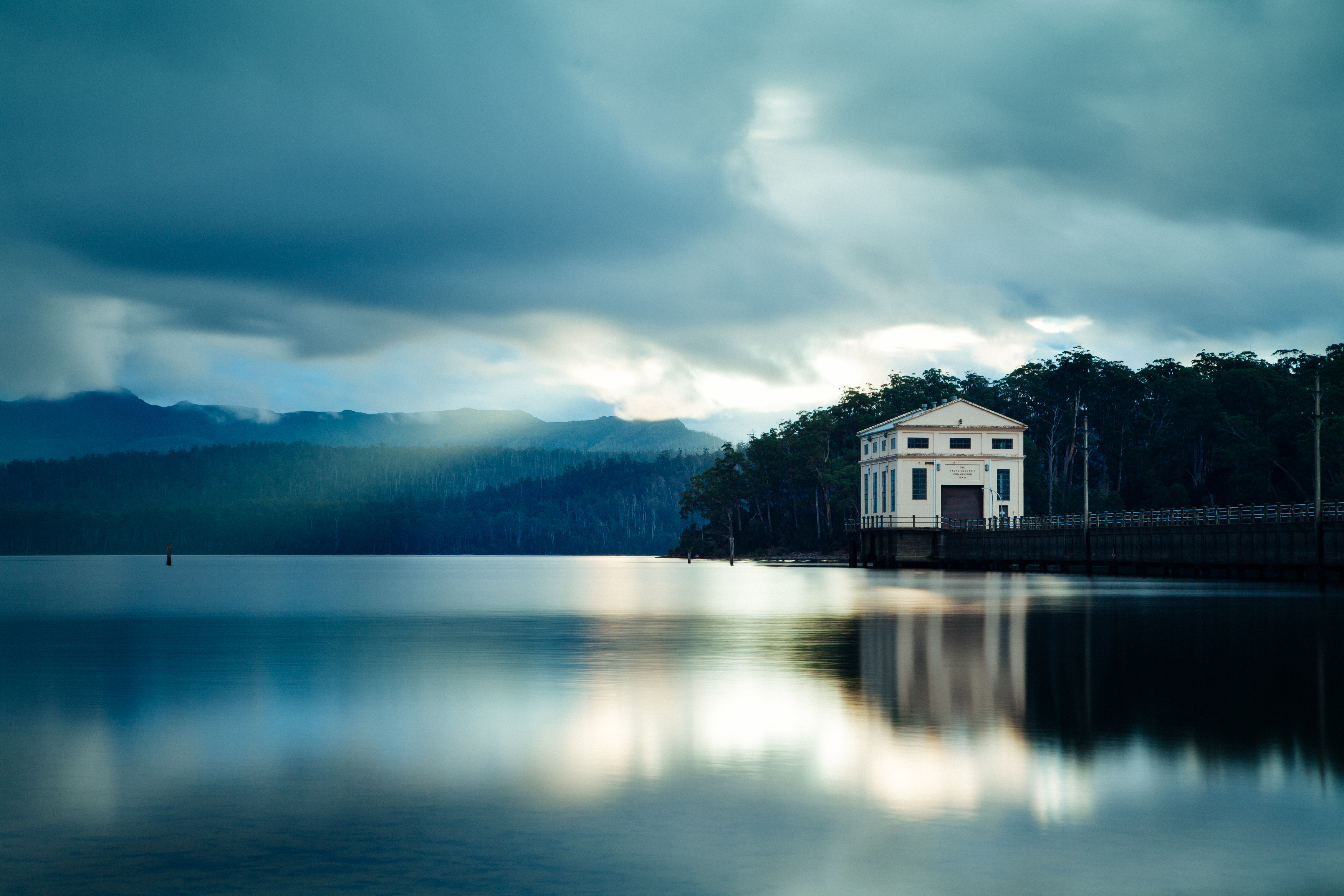 Part owned by Robert Di Nero The Greenwich Hotel was always going to be something a little bit special, but it’s the hotel’s TriBeCa Penthouse that is without doubt the crowning glory. 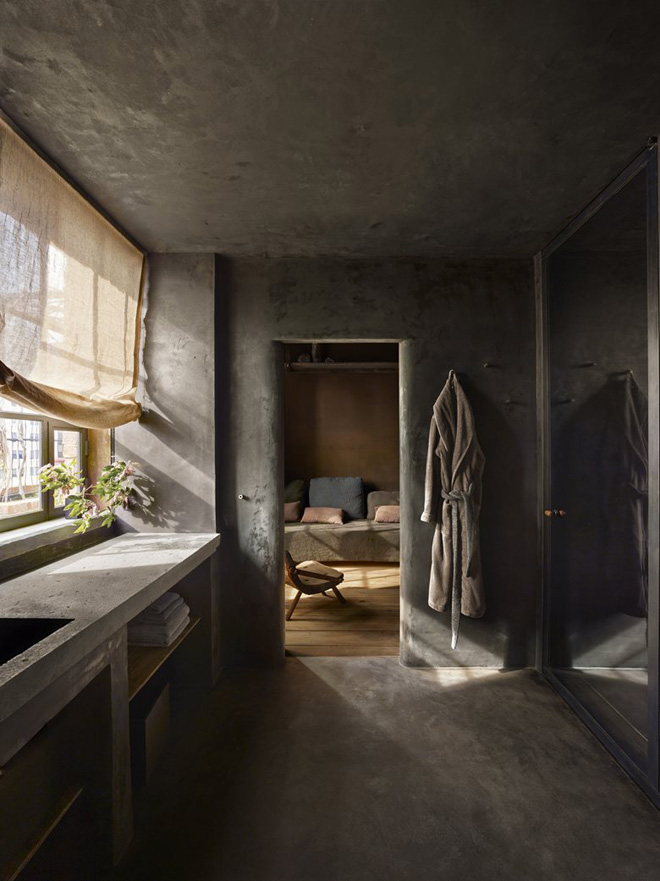 The designers and architects were inspired by the ancient Japanese design ideal of Wabi-Sabi, finding beauty in imperfection and authenticity of materials. 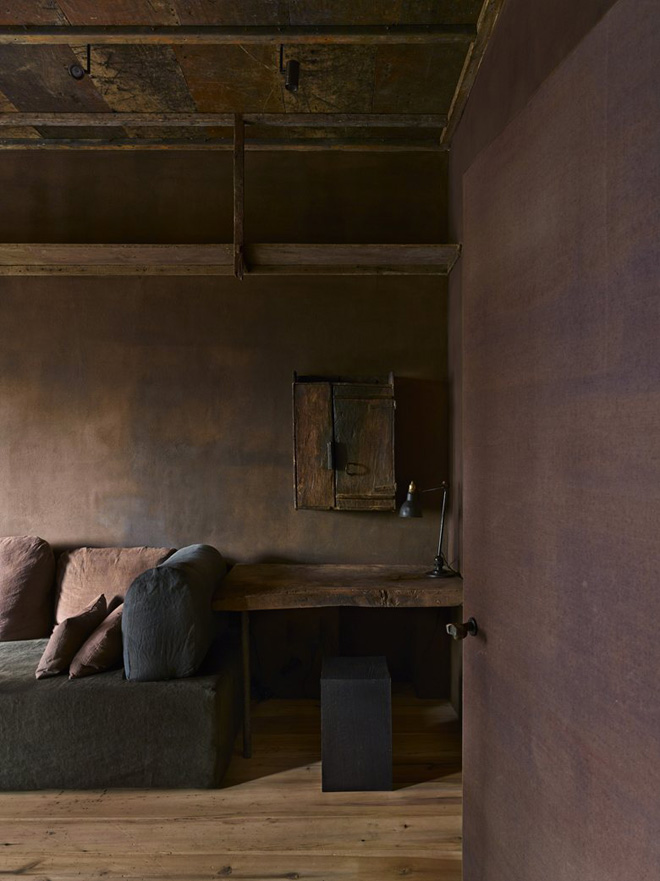 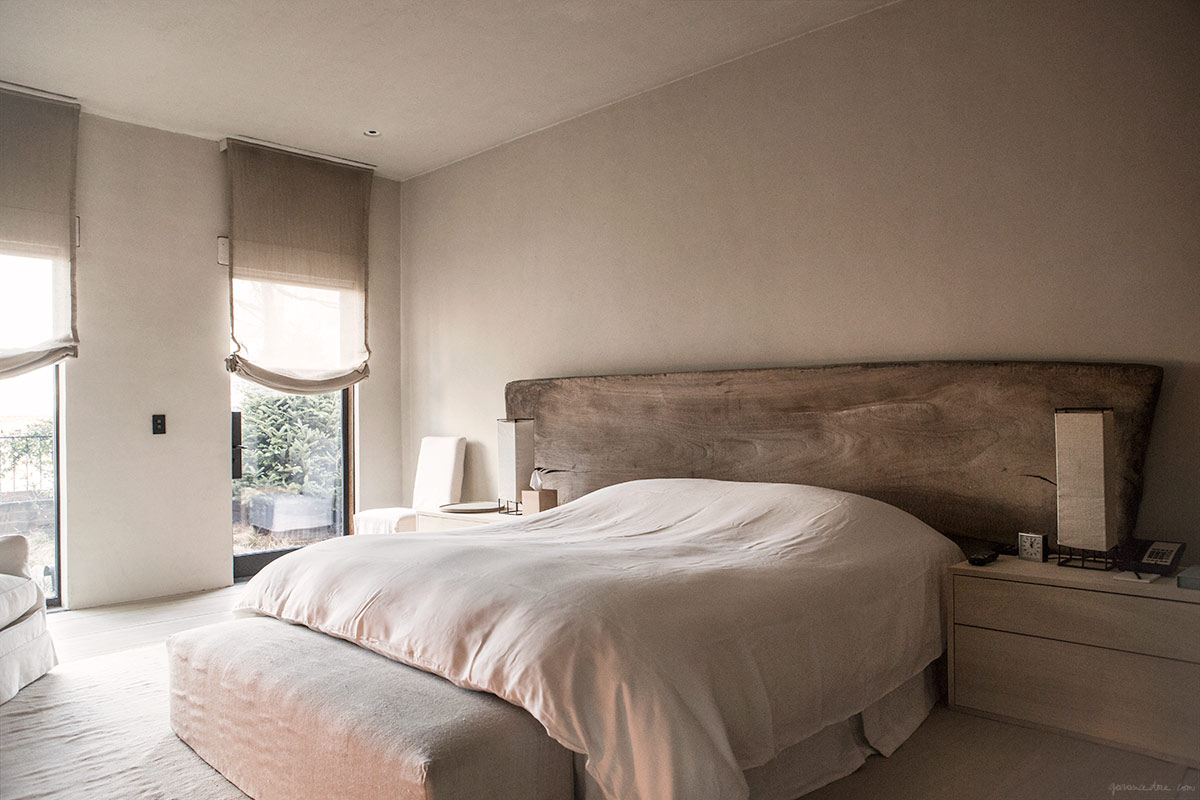 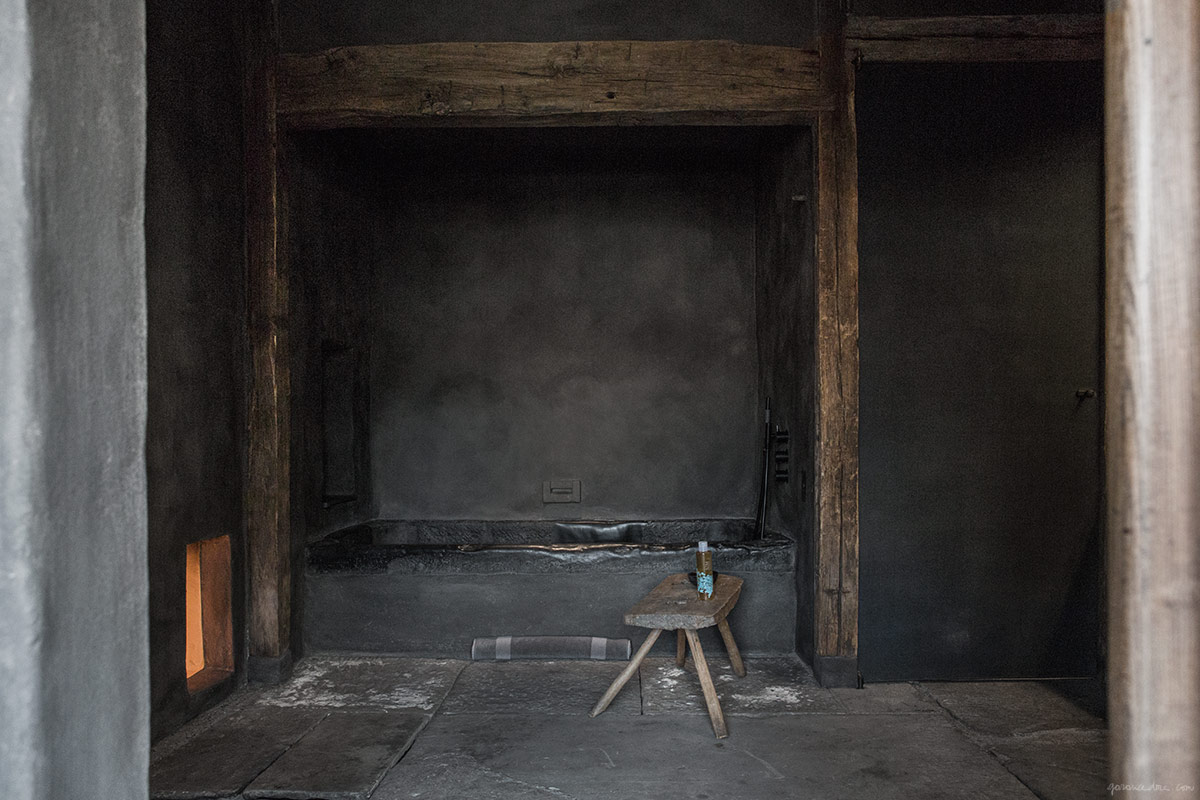 “The 21st century is a period of recuperation. We have to reuse what is already used or thrown away.” Axel Vervoordt – Designer of the TriBeCa Penthouse.

Drawing inspiration from traditional Japanese craftsmanship using stone, timber and washi paper the Aman Hotel is an escape from the bustle of Tokyo below. 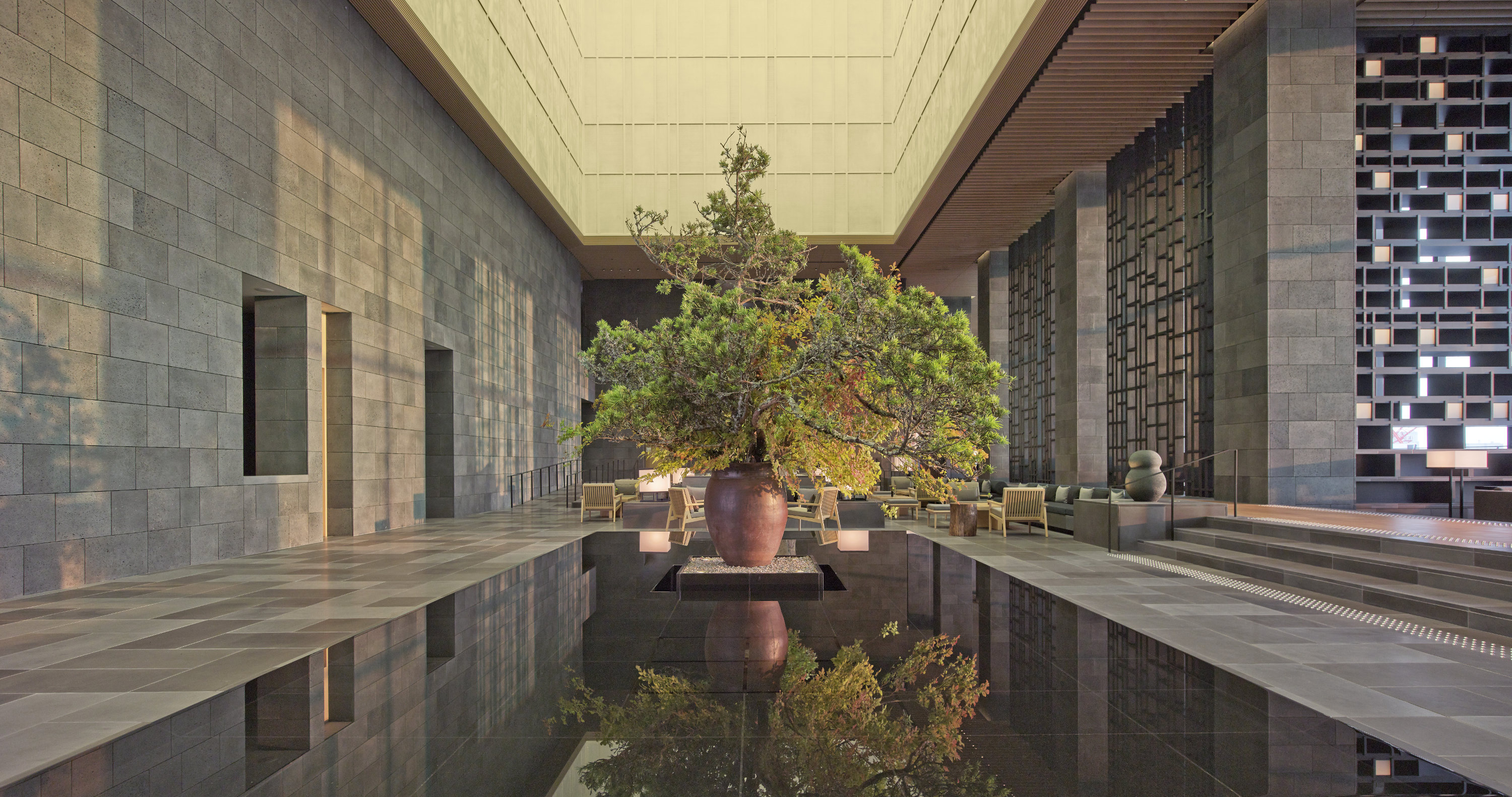 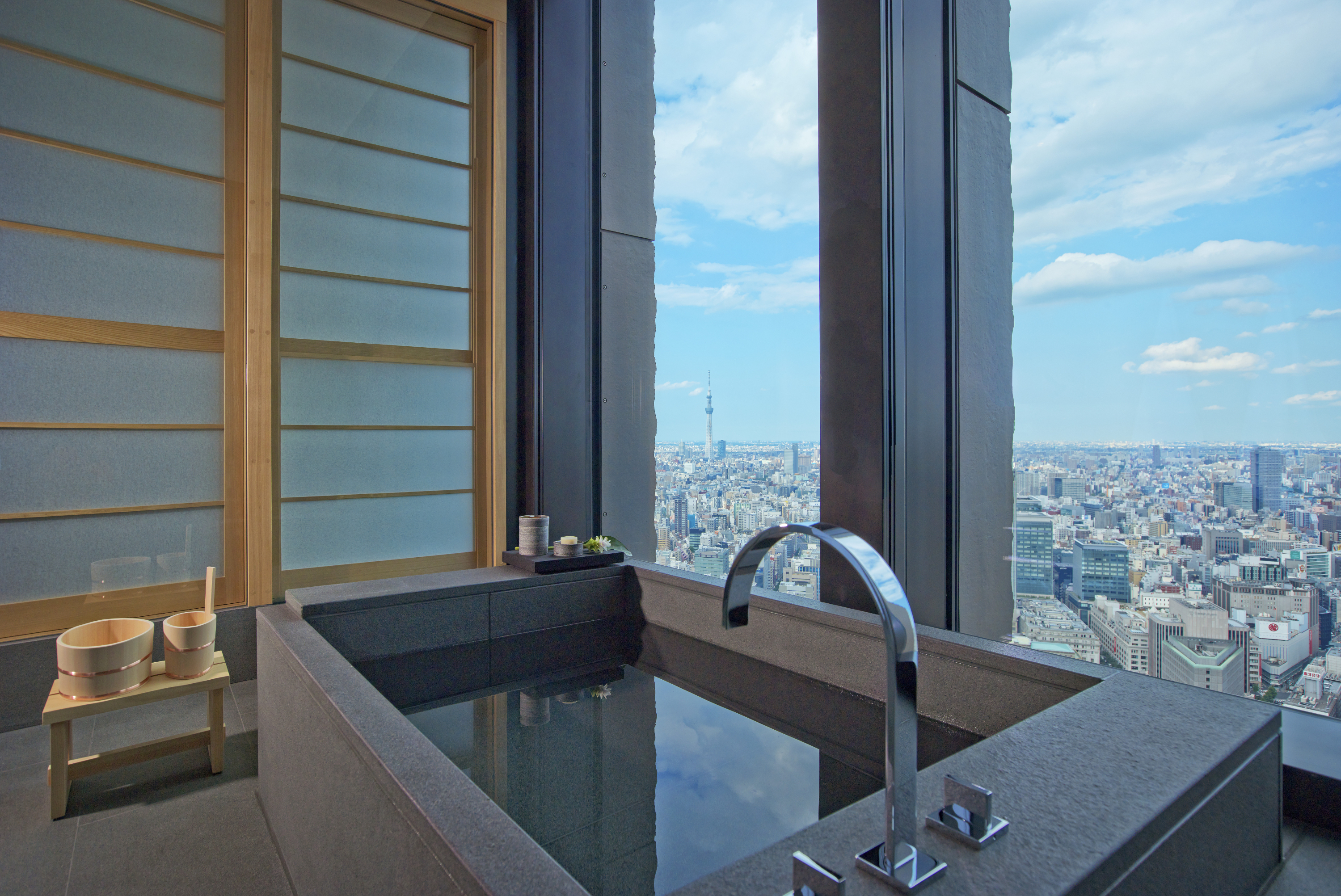 It is evident that nature played a huge part in this hotels conceptualisation. With muted colours and an inner garden surrounded by an ‘engawa’ or veranda. 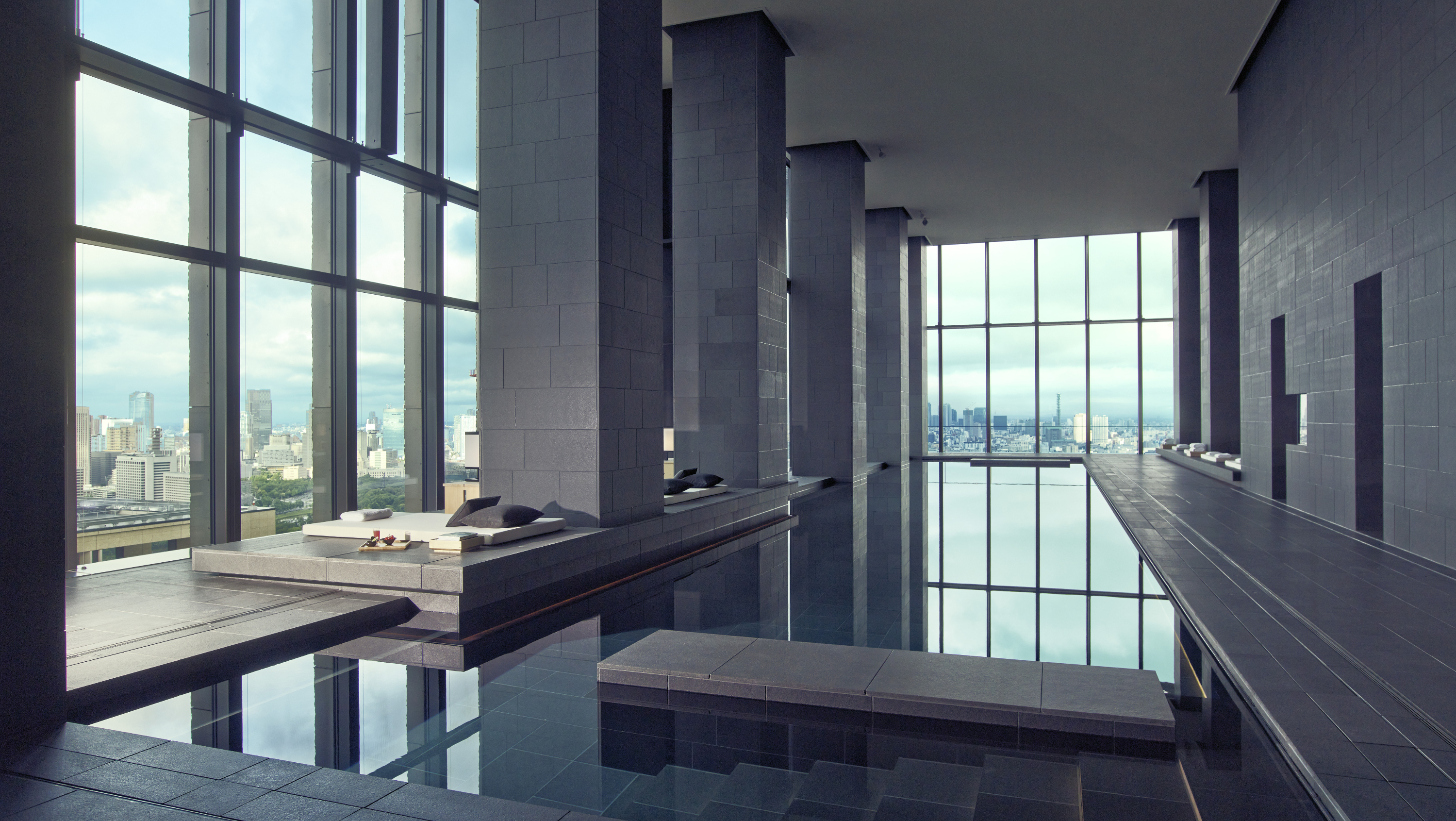 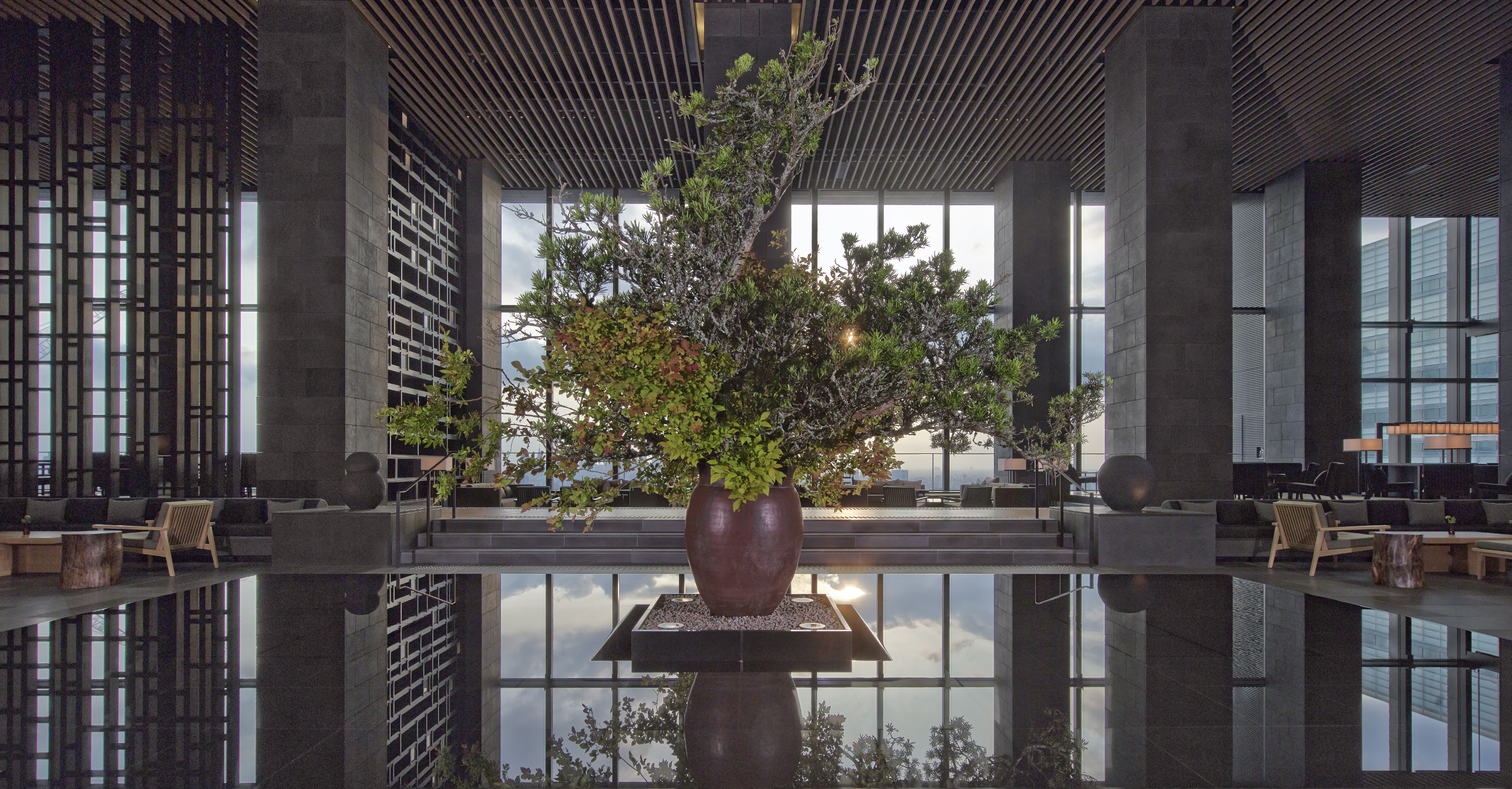 A testament to the influence of nature is the reception desk which was hewn from the trunk of a 250-year-old camphor tree. 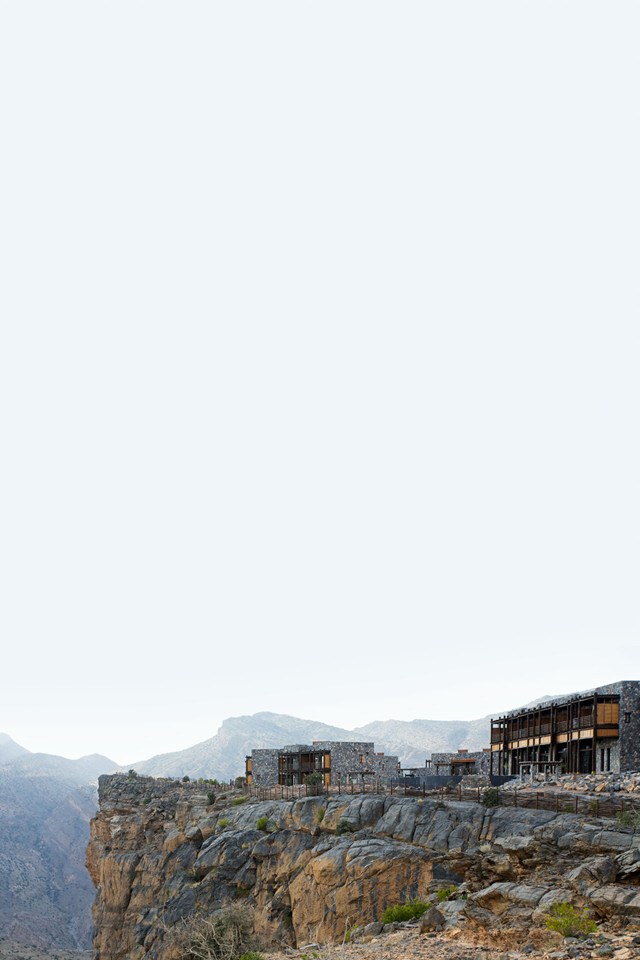 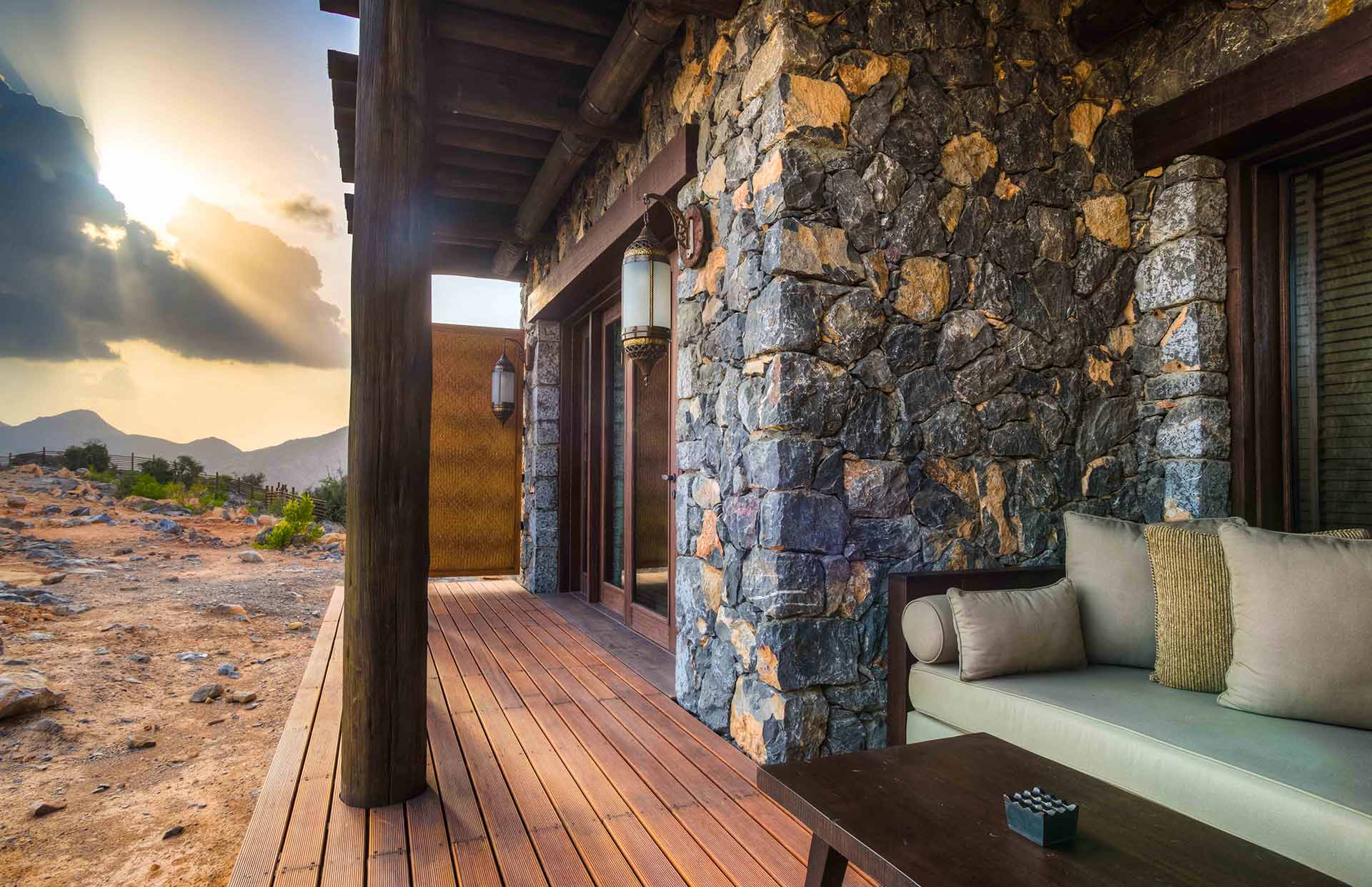 This may seem like a confusing name for a hotel based in arid Oman, but the hotel sits on a cliff overlooking a lush green valley full of pomegranate, apricot, walnut and peach trees. Made with local stone, from some angles it seems to blend into the mountain side it’s built on. 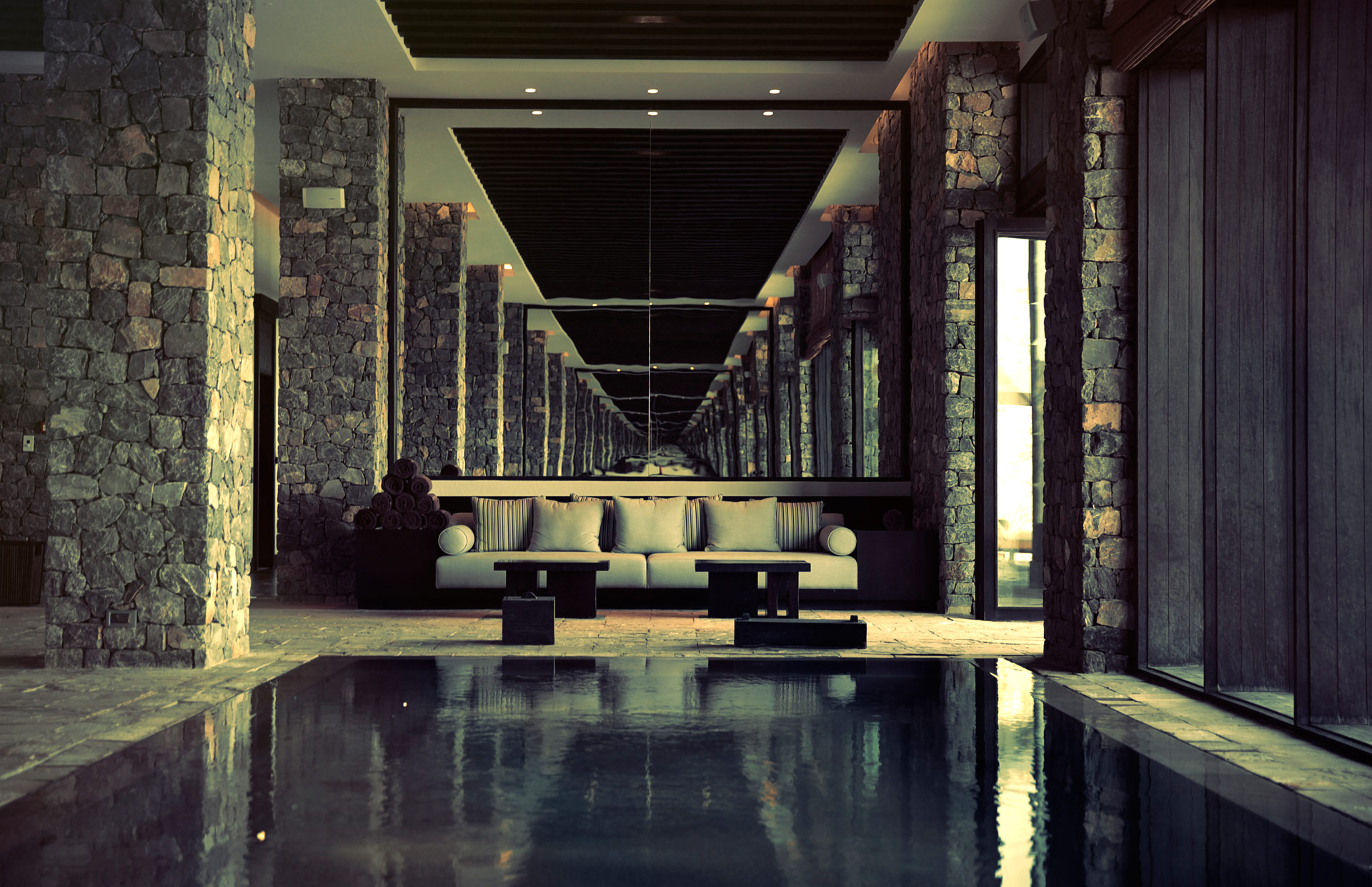 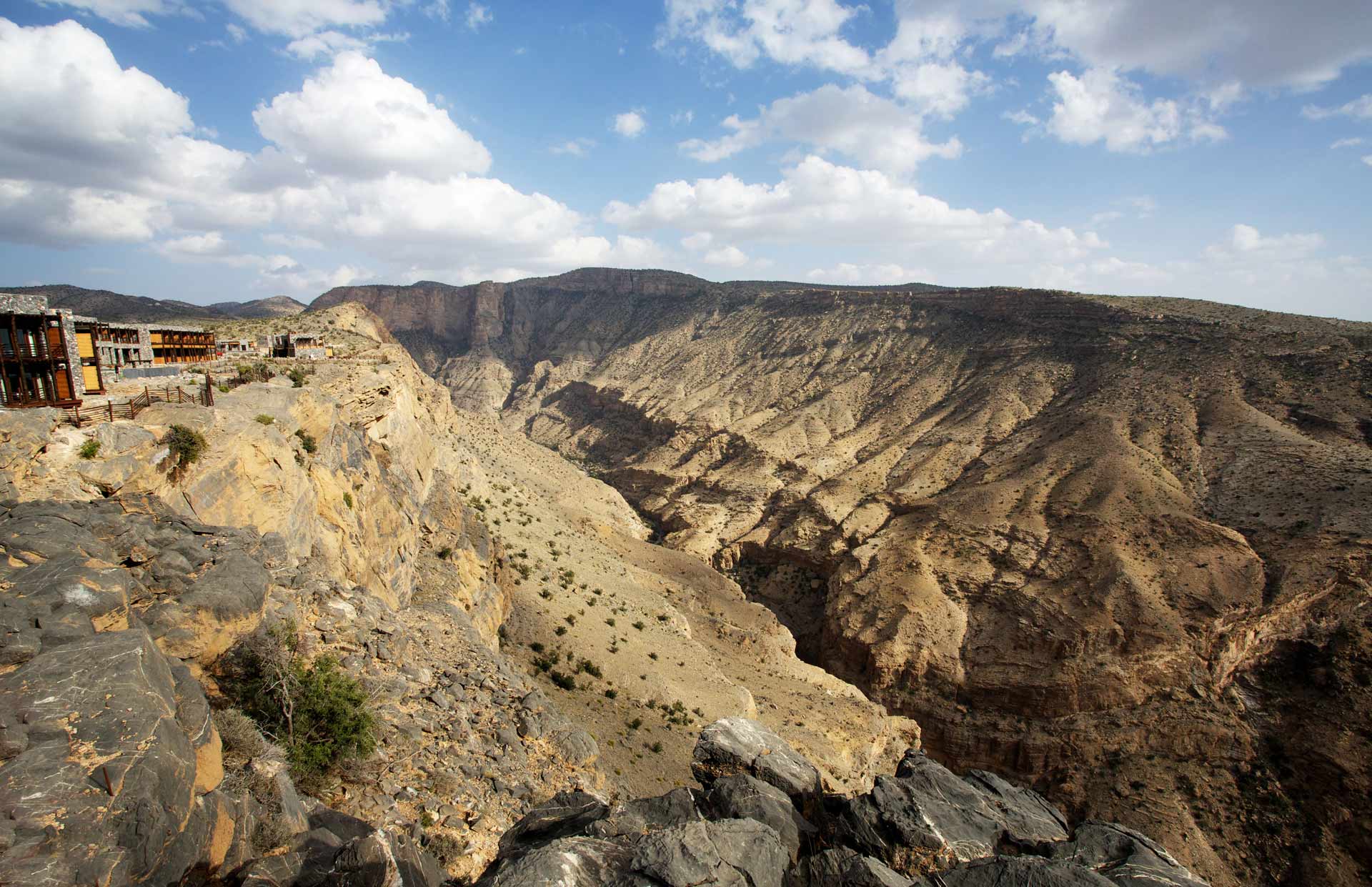 As beautiful as the interior is, it is somewhat overshadowed by its location.

Though these are separate hotels, with very different styles, located in very different parts of the world. There are similarities we can draw between them.

One recurring theme that can be seen, not just in these hotels but in contemporary design in general, is a move toward the Wabi-Sabi ethos, epitomised in the TriBeCa penthouse. This emphasis on things that are imperfect, impermanent and incomplete. Re-used materials are found throughout these hotels, such as the local stone used to build Jabal Akhdar, the wood and stone in the Aman Hotel and even the Pumphouse itself, the external of which was intentionally left untouched. Age and decay are appreciated and respected. Rather than worn out, an item is viewed as having lived. This is not to say Wabi-Sabi is shabbiness or untidiness, as this implies disrespect. Instead it is appreciation for the life cycle the item or room has been through, it is a mark of respect. There is a very human reflection to Wabi-Sabi 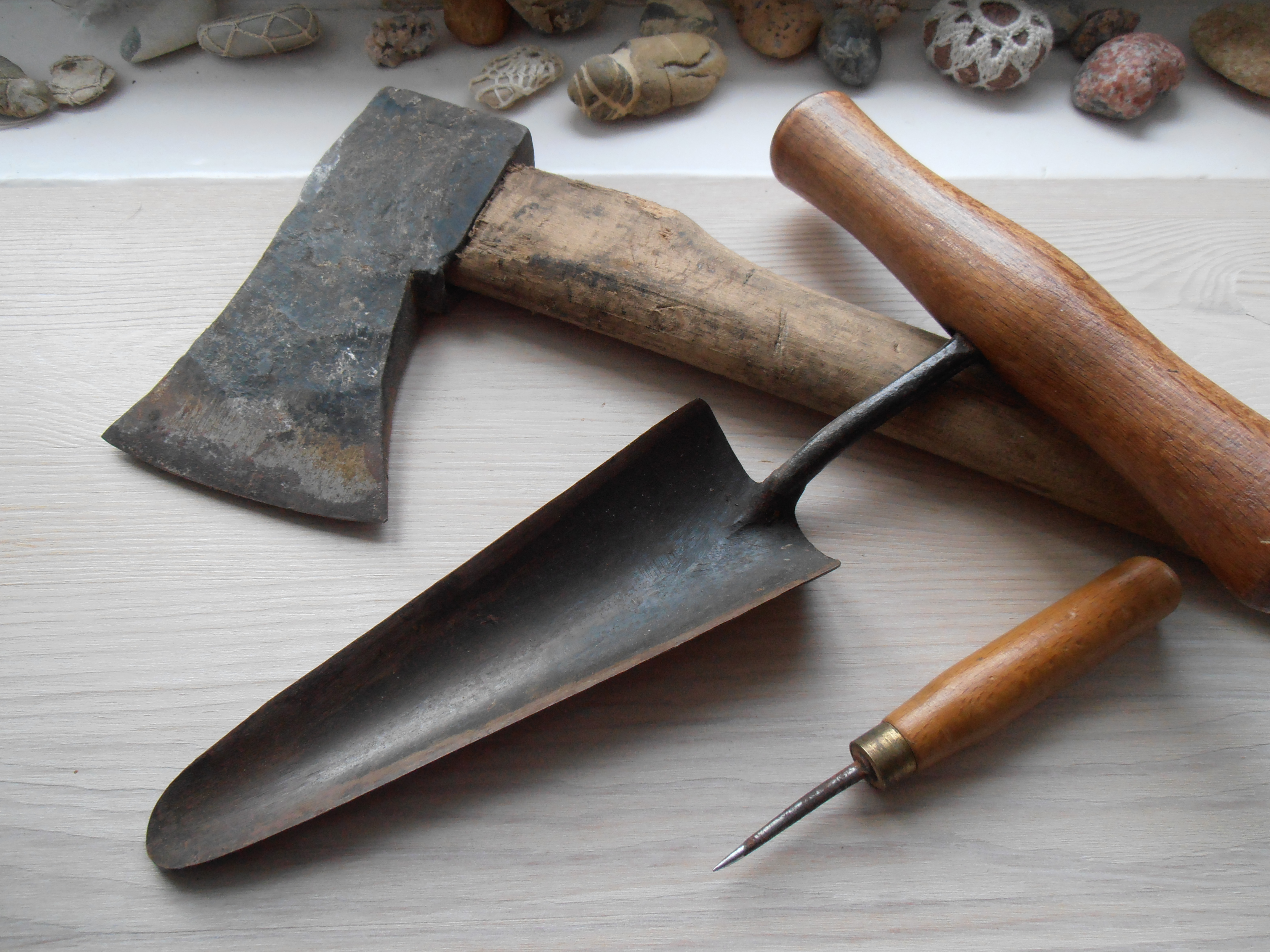 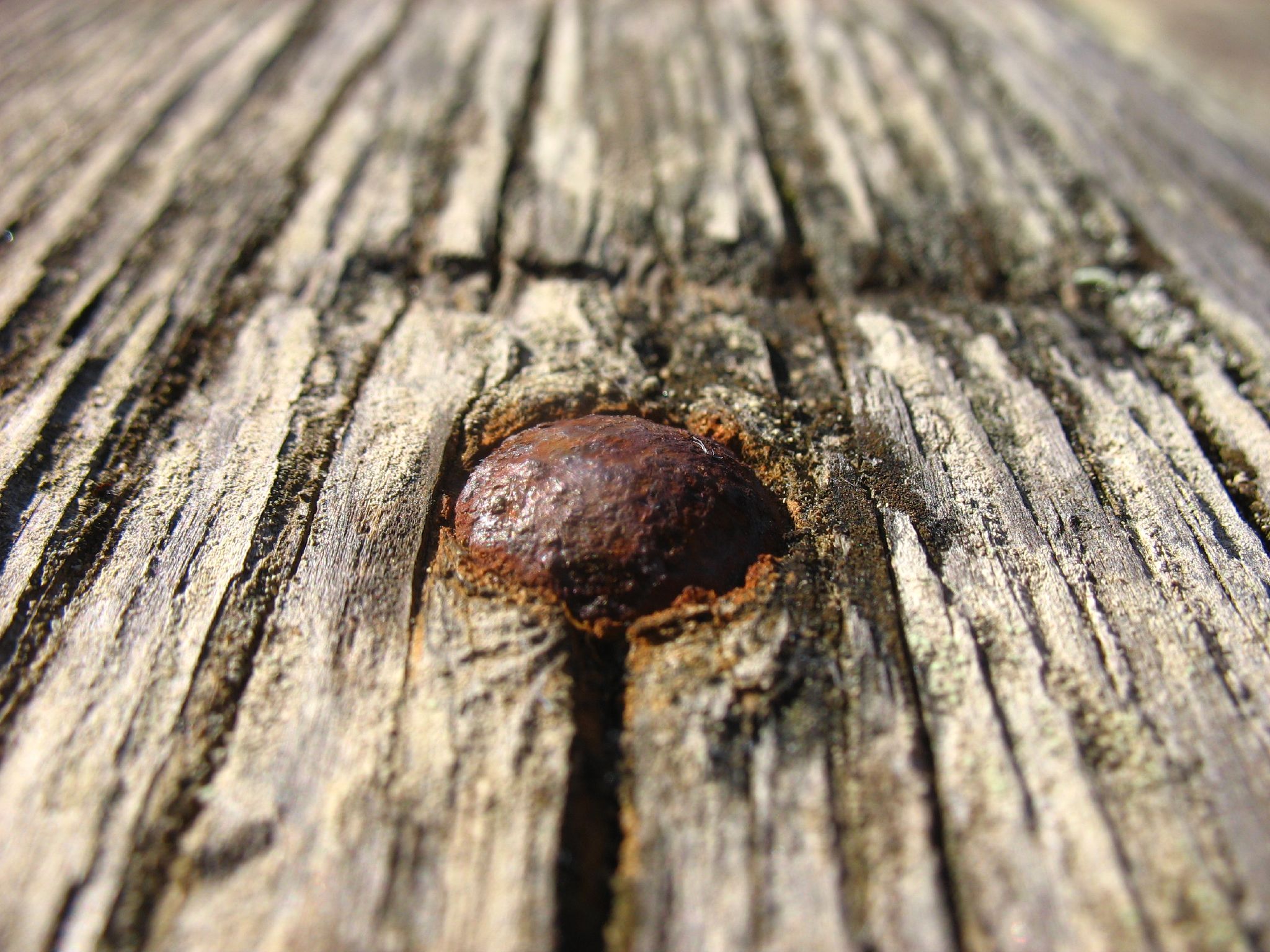 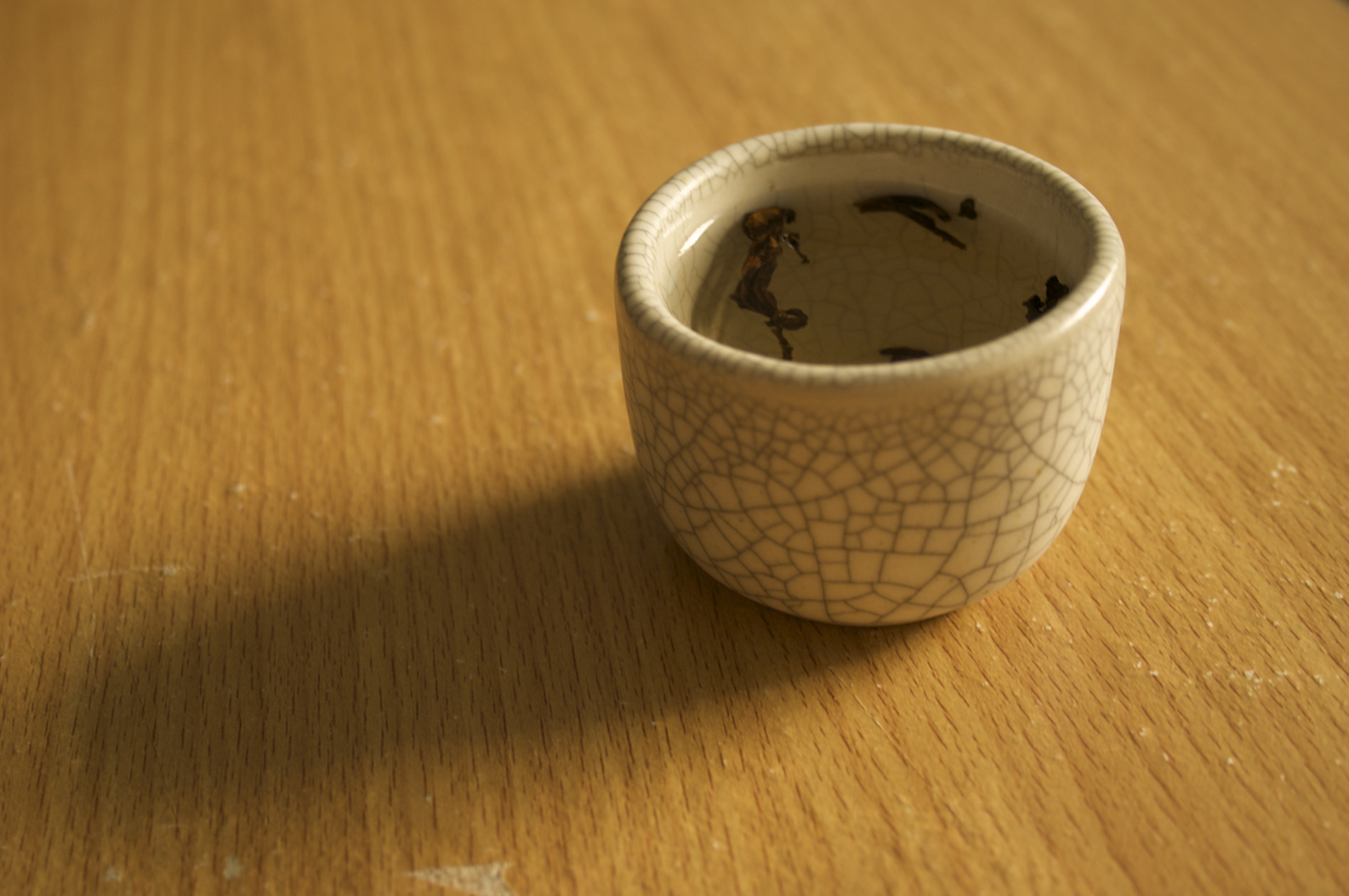 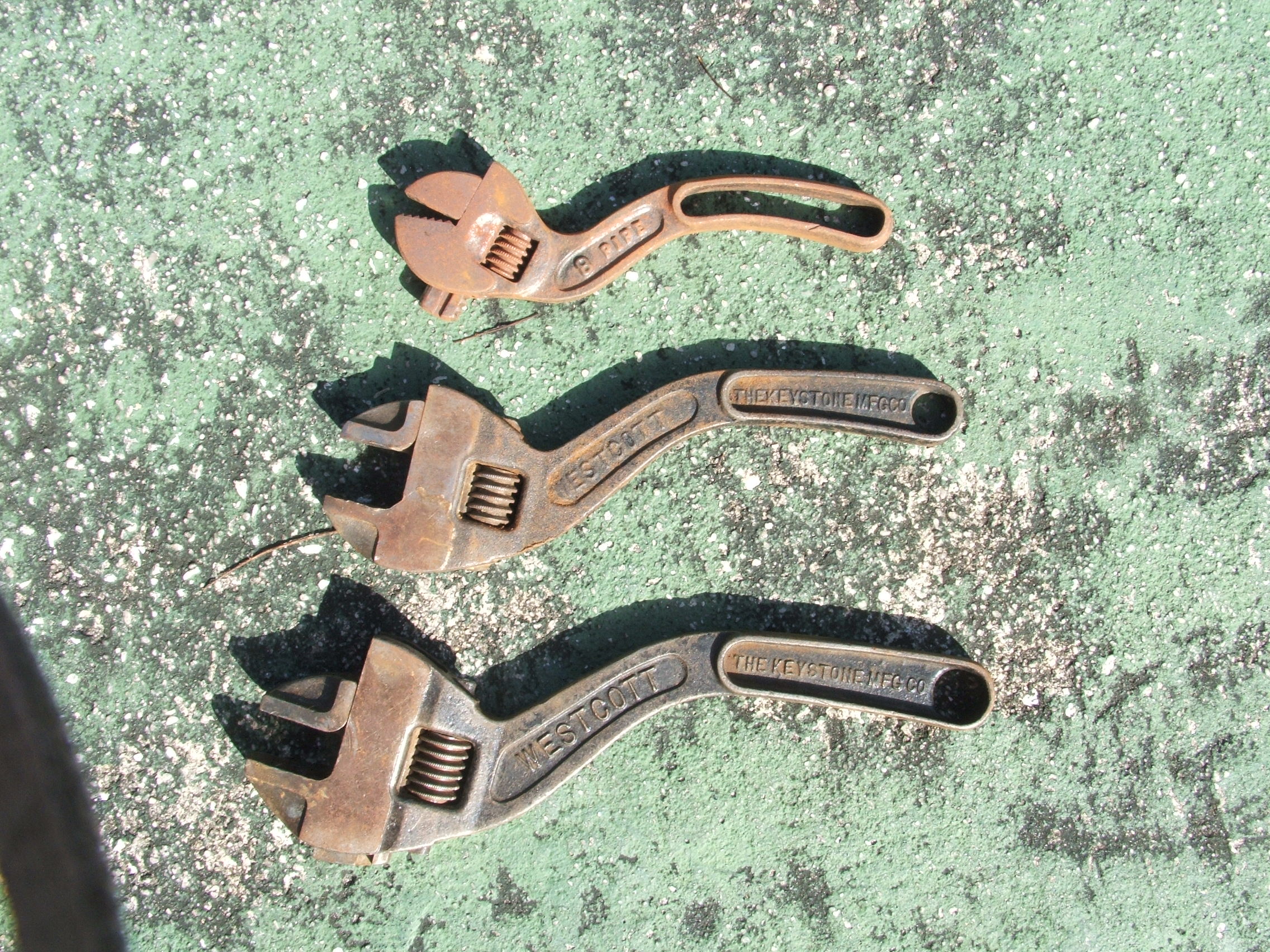 Another theme present in these four hotels is a sense of minimalism. Which like Wabi-Sabi, has routes in the far-east, mainly Japan. Nothing is used or seen that is not needed, or without purpose. 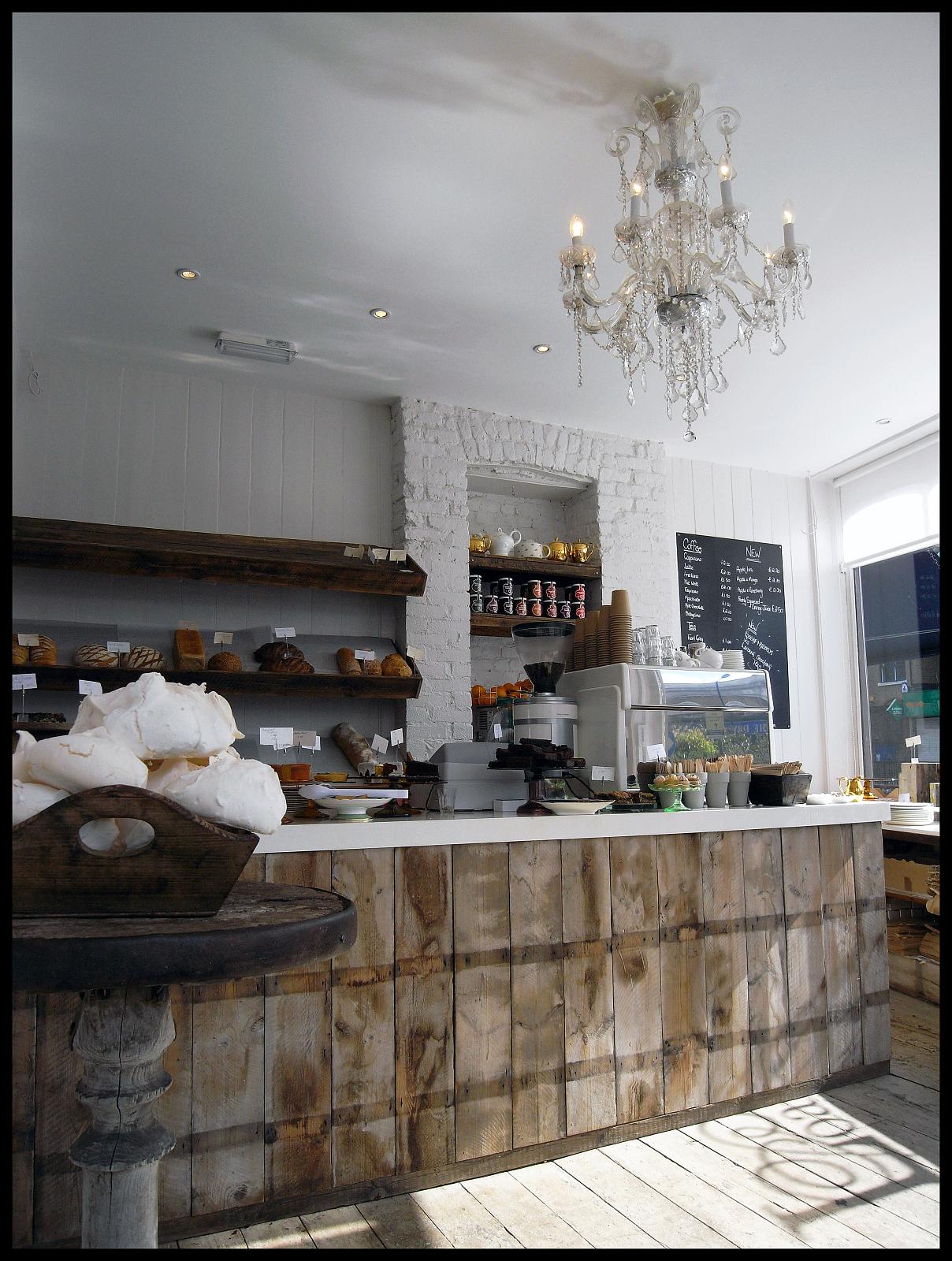 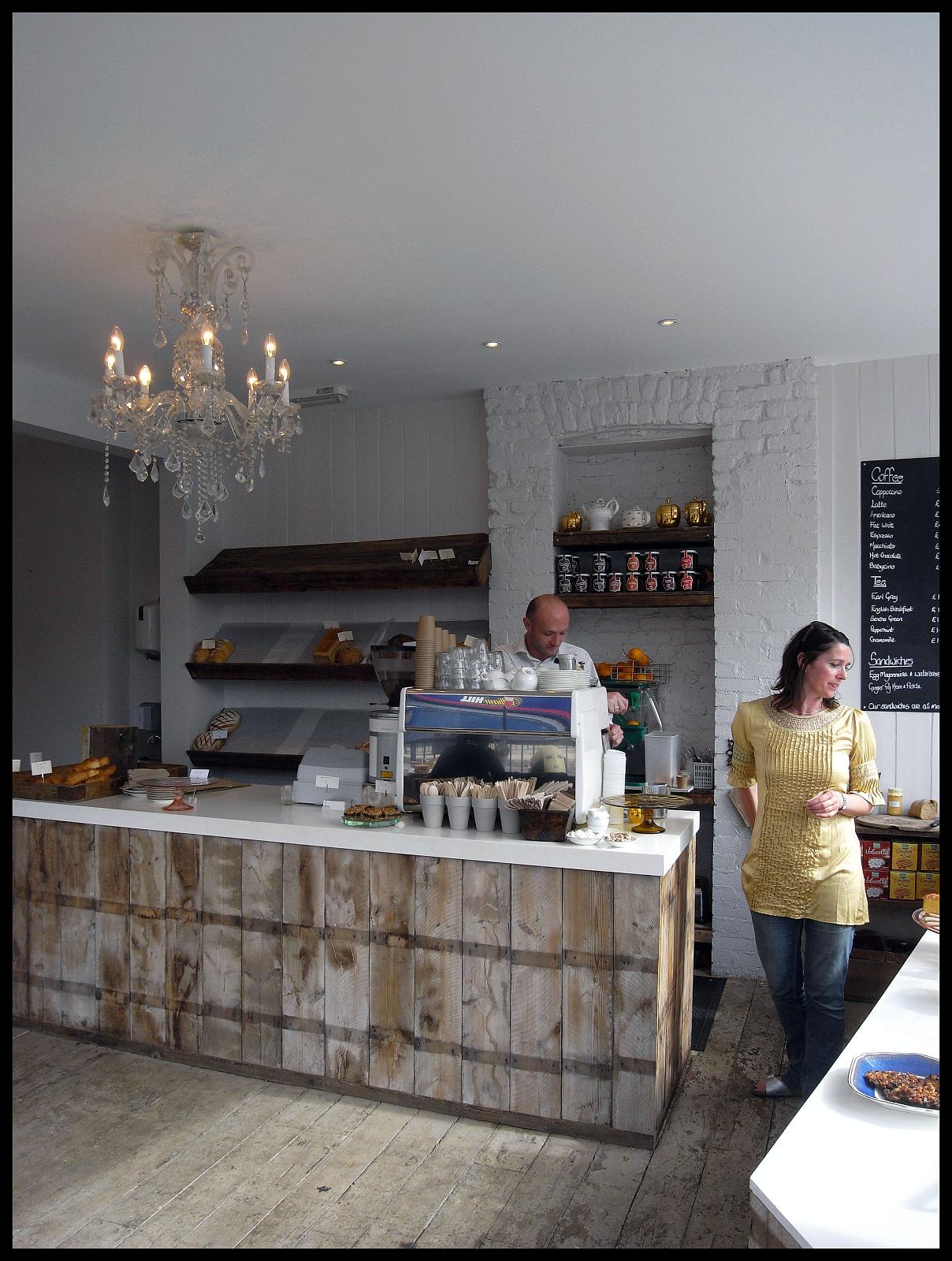 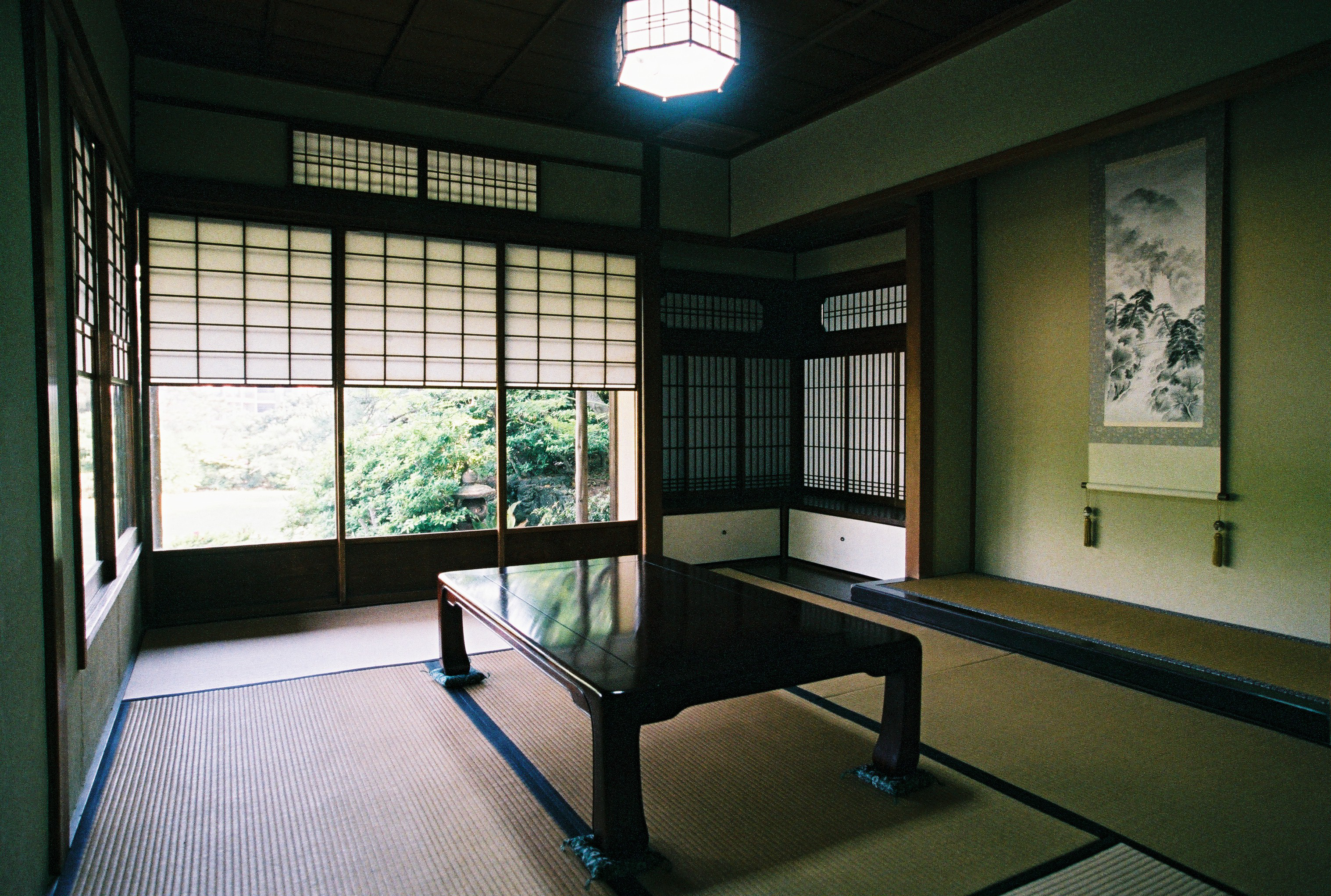 In this ‘nakedness’ we see shapes, colours and contours that would usually be hidden by decoration, thus these formerly hidden shapes become decoration themselves. If there is any art work it accentuates rather than distracts. Utensils, while beautiful, are still functional, still meant to be used. Of course there are plenty of traditional hotels with glamour and decoration pouring out of them. But they are exactly that, traditional. More contemporary hotels and home spaces are, we believe, moving away from that. 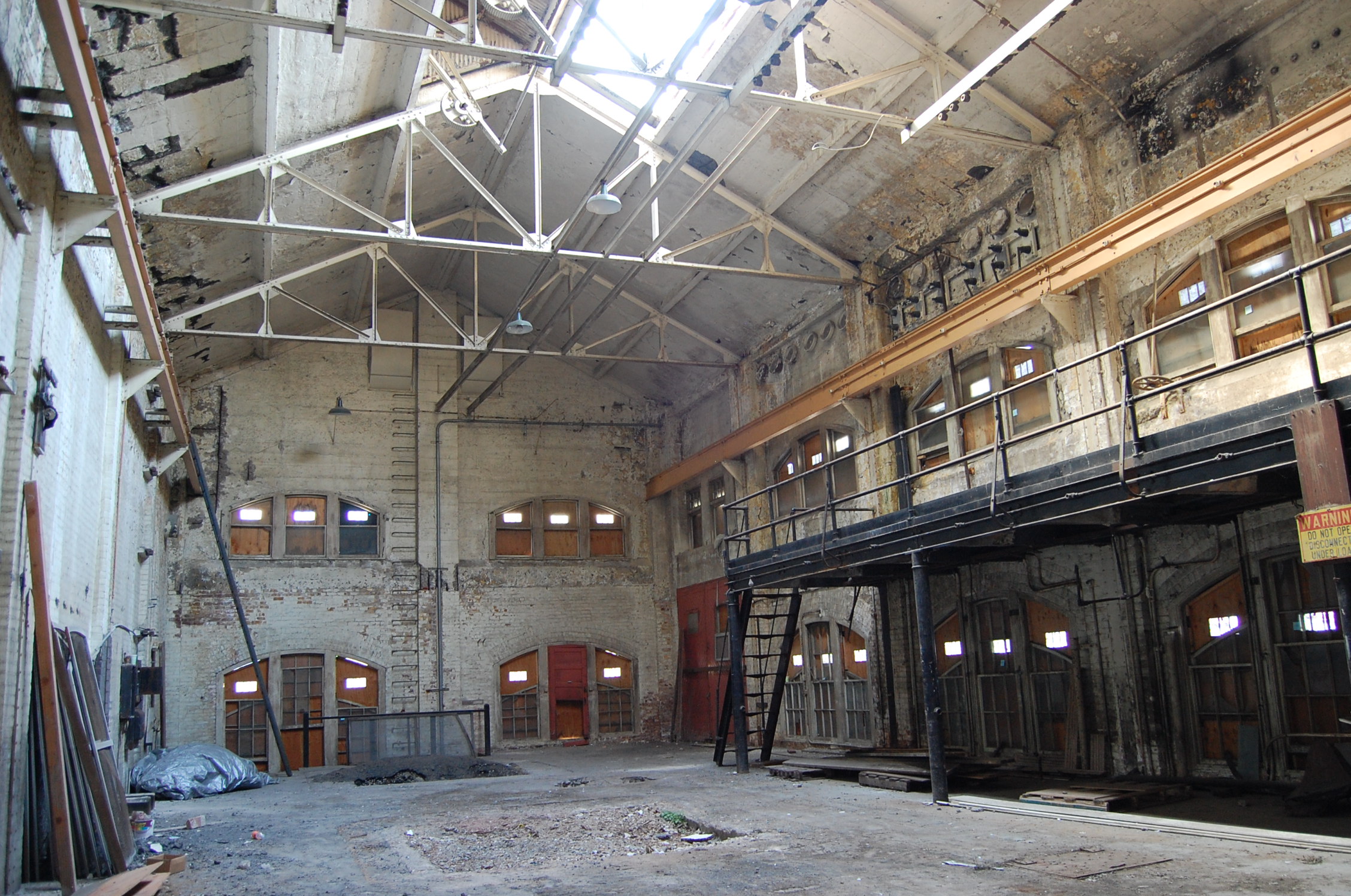 One ‘trickle-down’ style trend that amalgamates both Wabi-Sabi and Minimalism is the contemporary ‘Industrial Chic’. Industrial units are being converted into modern living spaces. Typically they are sparse in decoration and open plan. This encompasses Wabi-Sabi as often the bones of the building are visible, rafters, girders, bricks etc., thus showing appreciation and paying homage to the buildings heritage and use. The open floor plan and typically large windows are an aspect of minimalism, as it helps to bring the feeling of outside, in. It draws a resident closer to the bones of the building while at the same time puts them closer to nature. Another aspect of minimalism that can be seen in the industrial trend is the infrequent use of decoration. This unconsciously makes one looks at and appreciate the lines of the building itself. And when decoration is used it draws the eye and has a more profound effect. 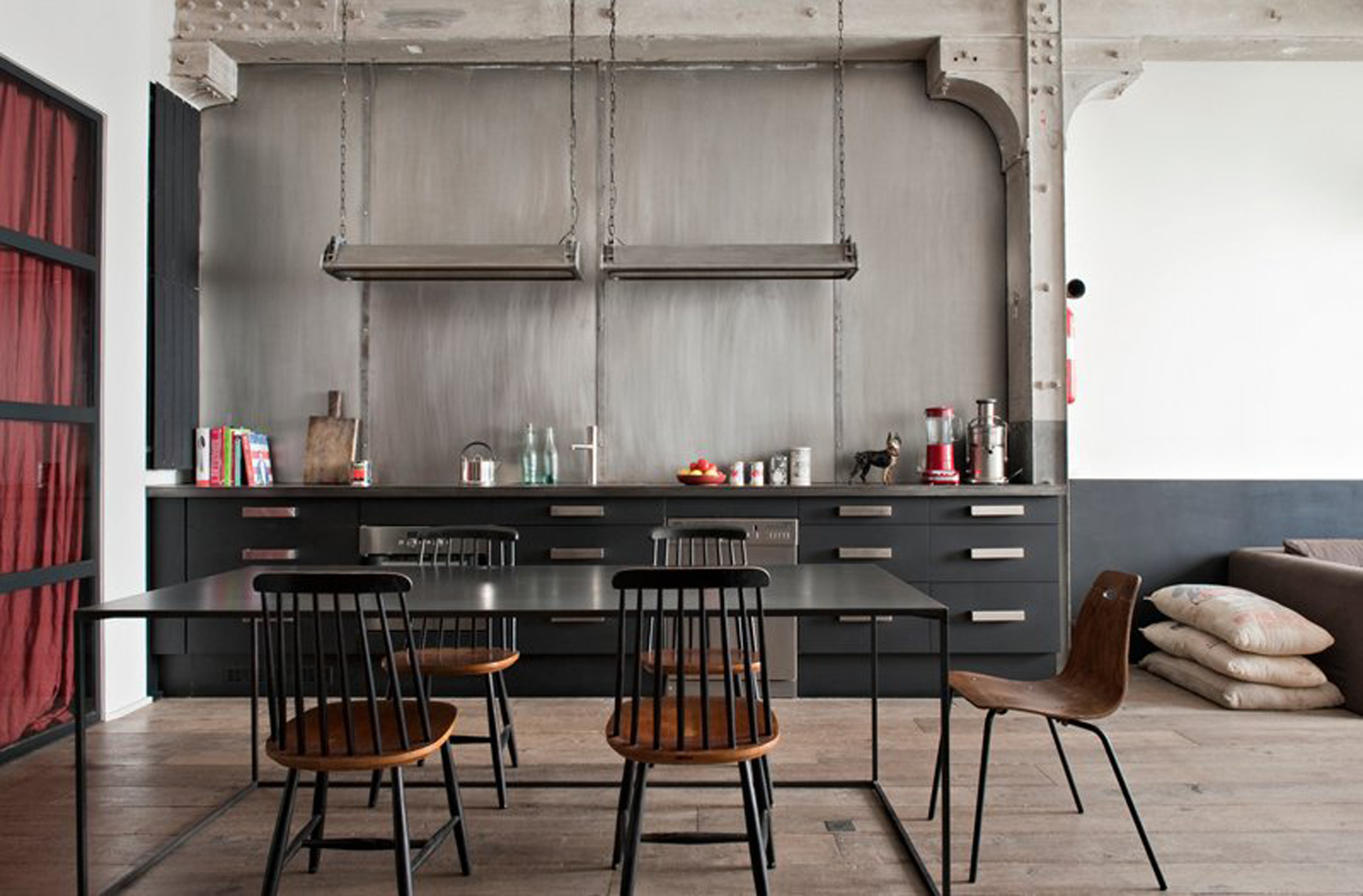